At Worlds end, How far the US Navy has sunk 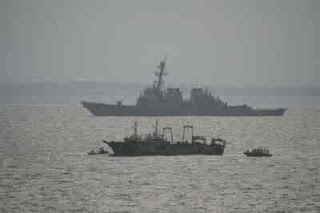 First, let me preface the above title with the disclaimer that it is not intended to impugn the service of our military members.
The real reason for this post is that the Obama Administration took credit for the Pirate standoff conclusion (on Easter) when US Navy Seals snipers were given the green light to fire from their Commanding Officer aboard the USS Bainbridge.
Never mind that the Obama Administration started this standoff in typical liberal fashion (treating it as a law enforcement point of view) and sent an FBI hostage negotiating team to the scene to negotiate a peaceful resolution.
Now that we know what really happened and how long it took to bring this to an end do to the fecklessness of the "Carter-like" Obama who had no comment for day into the drama. I can say "Carter-like" because I was in the US Navy, off the coast of Iran for the entire 444 days that Carter tried to negotiate the US Embassy hostages by the radical Ayatollahs (including a young future Iranian President who was one of the gunmen) out of.
Since the rescue, Obama beats his chest and yells "see what I did" and sends out his sycophants to the media with rhetoric about plans to attack the pirates bases. The pirates hold a press conference of their own to say how misunderstood they were, that in fact they aren't pirates but a voluntary "coast guard". This line was quickly picked up by Al Sharpton who critisized the handling of the situation because they were innocent voluntary coaster guardsmen.
In this upside down world where the Worlds greatest floating fleet of warfare are held hostage by a handfull of teenagers with AK47's (similar to what the Brits faced in the Straight of Hormuz when Iran took British sailors hostage).
If that isn't embarassing enough the following article will turn reason on it's head.
http://news.yahoo.com/s/ap/20090415/ap_on_re_af/piracy
In the article it states that the French forces siezed a "pirate/bandit mother ship" while the Americans were seeking to freeze their assets in court! The French fighting and the Americans retreating -- never thought would live to see this day.
Posted by rosey at 9:13 AM