Update on "Kenya BC": 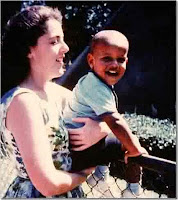 Barack and Mom
The plot thickens.
My last post was to show the article from "Canada Free Press" that did their own investigation on the coverup of the BC issue by our own MSM. Now, this latest information comes from another independent investigation of the Kenyan BC to lend credence to or refute authenticity of the document that has created the latest firestorm.
The investigator pulled the public record of Obama's mothers' divorce decree (because it is available to the public vs. a Birth Certificate is not) and compare the divorce timeline to the date on the Kenyan BC.
The public records were requested, money paid, documents received - but big problem occurred when inspecting the divorce papers -- Page 11 is missing. Page 11 is the BC for the Usurper.
Here is the image of the documents:
http://www.scribd.com/doc/18130289/Obama-1...s-Missing-Pg-11
Timeline issues that support the court imposition of authenticating the Kenyan BC.
Facts that we know are Obama was born August 4, 1961.
Obama's mother and father were married in Honolulu, HI (as stated in the divorce decree) on February 2nd 1961 (6 months prior to birth that places Obama's mother as 3 months pregnant at the time of marraige).
Note: Here we have direct proof that Obama's parents were in the State of Hawaii six months prior to his birth which should bolster the claim he was born in Hawaii. Page 11 (which is missing from the public record is where his original BC was entered into the Domestic Relations court as proof of child between the parents) should have put the matter of his birthplace as Hawaii to rest but cannot (how convenient that the very page that housed the record of birth is conspicuously missin and of course my being a birther is that my conspiracy theories are built on a house of cards and supported by paranoia). Divorces that encompass "custody of minor children" have to accompanied by the BC to prove the father is in fact the father of the minor child that the mother is seeking to retain custody of.
Page 2 of the divorce, states the following in regards to the mothers residence in Hawaii:

"That Libellant (mother) is now and for more than 2 years past a resident of Honolulu, City and County of Honolulu, State of Hawaii"
Note: Again we have direct proof that Obama's mother is stating in court that she is a resident of Honolulu for some 2 years past (This timeline in the record is ambiguous as to what is "more than" 2 years? Is it 2 years and a day, or is it 2 years and 8 months? But for argument purposes it should again bolster Obama’s claims of birth in the State of Hawaii, right?
Wrong, because another public record has surfaced showing that Obama’s mother was in Seattle starting classes on August 19, 1961. The divorce decree was entered January 25, 1964. If you go back 2 years, as stated in the divorce decree (dated 1/25/64) then it places Obama’s assertions that she was a resident of Hawaii sometime prior to January 25, 1962 but we now know that she could not have been a resident prior to August 18, 1961 because records have her in Seattle as of the 19th of August (15 days AFTER Barack was born).
Image of Obama’s mothers college transcripts:
http://www.wnd.com/index.php?fa=PAGE.view&pageId=106018
So again, where was he born?
We already know that according to the MSM cover-up of the birth certificate issue of Obama (as reported by the investigational reporting of Canada Free Press) and we now have further informational timeline backup that Obama’s mother wasn’t a resident of Hawaii prior to August 18, 1961.This information only bolsters the "prima facia evidence" of the Kenyan BC that was submitted for authentication to the court and places further questions about the eligibility of the Usurper.
Posted by rosey at 7:54 PM