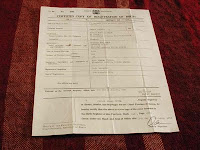 The fiery attorney that has given birth to the term “birthers” has done it again.
In a pleading that was entered into the Court Record in Keyes v. Obama/Sotero the exihibit that was attached is a photo of a birth certificate purported to be for Barack Hussein Obama and the country of origin is Kenya!

Below is the pleading:

SPECIAL MOTION FOR LEAVE TO CONDUCT PRE-RULE 26(f) DISCOVERY
TO DEFENDANT HILLARY RODHAM CLINTON and CERTAIN NON-PARTY WITNESSES
TO PERPETUATE TESTIMONY, PRESERVE EVIDENCE, and to TRANSMIT LETTERS ROGATORY PURSUANT to 28 U.S.C. §§1781(a)(2)-(b)(2)
The undersigned counsel for Plaintiffs has acquired possession of a color copy of one certain document (attached as Exhibit A to this motion), regarding which there are no ready means of authentication except by recovery of the original document. As should be apparent from the nature and content of the document, if authenticated, and shown to be genuine, the contents of this document will significantly narrow and shorten the discovery and pre-trial litigation period necessary in this case, and might lead to an early resolution by settlement or transfer of these proceedings to the United States House of Representatives and Senate according the procedures outlined in the Constitution.
It is also apparent (and hearsay evidence available to Plaintiffs’ counsel aggravates her concerns) that political pressure may be brought to bear to destroy all relevant evidence, whether such evidence exists within or outside the borders of the United States of America.
It would appear to the undersigned counsel that either 28 U.S.C. §1781(a)(2) or 28 U.S.C. §1782(b)(2) or some combination of these statutory authorizations outlines the procedures by which to transmit letters rogatory and other requests to the proper authorities abroad in Kenya and the United Kingdom of Great Britain and Ireland.
For two classes of evidence at issue here, namely all requests for relevant passport materials and other documents existing within the United States of America, as well as all requests to be made through diplomatic channels to foreign tribunals, Defendant HILLARY RODHAM CLINTON is the Secretary of State of the United States of America, and accordingly, Secretary Clinton is the first and primary proper target of letters rogatory to be submitted pursuant to 28 U.S.C. §1781(a)(2).
FIRST, Plaintiffs pray that this court authorize Plaintiffs to issue a special subpoena for deposition duces tecum to Secretary HILLARY RODHAM CLINTON be cited to appear within 21 days pursuant to (or in the letter and spirit of) Rule 27 of the Federal Rules of Civil Procedure (even though this action has been filed and served, many months will pass before the Rule 26(f) Conference can be held to plan for discovery among the parties). The purpose of Rule 27, even though designed for pre-filing discovery, is fulfilled and relevant here, in that some (above-noted) hearsay evidence exists that an individual involved in the examination of passport files at the United States Department of State relating to and involving certain 2008 Presidential candidates may have been killed in relation to such inquiry. Last year it was announced by former secretary of State Candoleeza Rice that there was tampering with the passport records of three major presidential candidates and it was investigated by the inspector general. Lt. Querl Harris was one of the suspects in passport tampering scandal. Washington post has announced that he was cooperating with the FBI and shortly thereafter he was found dead, shot in the head, sitting in his parked car. This case remains open and unresolved. Under such circumstances, “perpetuation of evidence” becomes a more and more significant and time-sensitive issue.
SECOND, Plaintiffs pray that this court will send a request for letters rogatory pursuant to 28 U.S.C.§1781(a)(2) to Defendant HILLARY RODHAM CLINTON and other relevant officers in the United States Department of State to issue and transmit letters rogatory through proper diplomatic channels to the following foreign offices of public record and vital statistics:
For the Republic of Kenya:
KENYA
The Principal Civil Registrar
Dept of Civil Registration
Office of the President
PO Box 49179
Nairobi
Kenya
Tel: 227461
And/or
Office of the Principal Registrar
Deputy Registrar
Births, Deaths, and Marriages for the
Coast Province of Kenya
(or its modern successor, equivalent jurisdiction) in and for
MOMBASA, KENYA
(formerly British East Africa)
and/or
Kenya High Commission45 Portland PlaceLondon W1B 1AS
Tel No. 020 7636 2371

http://www.direct.gov.uk/
General Register Office
http://www.gro.gov.uk/gro/content/certificates/contact_us.asp
Certificate Services Section
http://www.direct.gov.uk/en/TravelAndTransport/Passports/
WhoiseligibleforaBritishpassport/DG_174145
General Register Office
PO Box 2
SOUTHPORTPR8 2JD
Tel: +44 (0) 845 603 7788 (8am to 8pm Monday to Friday. Saturday 9am to 4pm).
THIRD and in the alternative, Plaintiffs pray that this court issue and transmit letters rogatory and requests directly to each of the above-and-foregoing listed foreign offices or agencies (or to the relevant tribunals with appropriate jurisdiction in the relevant countries) without the intervention or assistance of Defendant HILLARY RODHAM CLINTON and/or other officers of the Department of State and/or the Department of Justice of the United States of America.
It is urgent that this request be prosecuted prior to the normal onset of discovery in this case, again, according to the general letter and spirit of Rule 27 of the Federal Rules of Civil Procedure regarding the perpetuation of testimony. There has never been a constitutional challenge to the identity and eligibility of a sitting President of the United States and so there are no direct precedents regarding this matter, but it is fairly safe to say that the potential consequences and fallout from this present filing being made public will be severe and significant, even though the undersigned counsel makes absolutely no pre-judgment or prediction regarding the actual authenticity of the document of which only a color copy taken by a camera at an odd angle, which is attached herein as Exhibit A.
PRAYER FOR RELIEF
For all of the above-and-foregoing reasons, Plaintiffs pray that this court will grant leave to the Plaintiffs to conduct the aforementioned special discovery immediately and prior to the normal Rule 26(f) Conference, pursuant to Rule 27 and all or some subset of the procedures authorized in 28 U.S.C. §§1781(a)(2)-1781(b)(2). Although the urgency of this request cannot be overstated, 21 days is the normal time for service of such a request as this under Rule 27 of the Federal Rules, and the undersigned counsel reminds the Court that she will be out of the United States from August 2, 2009, to August 24, 2009.
Respectfully submitted,
Saturday, August 1, 2009
Lughnasadh/LaLunasa

Telephone (949) 683-5411
E-Mail: dr_taitz@yahoo.com
There will be the detractors out there that will say it does not prove anything, or its a forgery, or it is "heresay" and cannot be admitted into evidence. The main thing is that those who call themselves birthers will now have alot more joining their ranks because this document cannot be suppressed because it is part of the "official court record" and should provide further distrust of the Usurper who can put all of this controversy to rest by simply and inexpensively releasing the document that he states is his REAL Birth record in Hawaii! The more he fights, the more birthers are born.
Posted by rosey at 9:58 AM