Bumps in the road, to where? 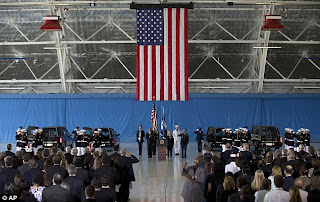 Days after this image was taken of those who supposedly mourned for the loss of life resulting from dangerous policy decisions, Obama and Hillary find themselves in trouble politically.  First you have all of the lies intended to coverup the real issues that led to these deaths by blaming an obscure film (which by the way made its way into the UN speeches) instead of terror attacks.  Then you have Obama downplaying this tragedy by saying these events that led to this image as "Bumps in the Road"!  The sacrifices of these diplomats and former Navy Seals were, according to Obama and company, not to America but to his political ambitions and his vision of transformation of this country.
Posted by rosey at 5:21 AM