The man who wants to be California Governor - a Socialist! 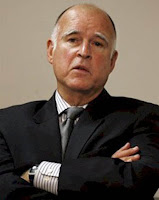 In 1995, during the Clinton Administration Jerry Brown laid out his vision of America (sounds alot like Obama today) on a radio show, here is the transcript:

The conventional viewpoint says we need a jobs program and we need to cut welfare. Just the opposite! We need more welfare and fewer jobs. Jobs for every American is doomed to failure because of modern automation and production. We ought to recognize it and create an income-maintenance system so every single American has the dignity and the wherewithal for shelter, basic food, and medical care. I’m talking about welfare for all. Without it, you’re going to have warfare for all. Without a universal health care like every other civilized country, without a minimum level of income, this country will explode. You can’t blame the guy at the bottom forever. At some point there’s a reaction and we’ll see that the real criminals are those calling the tune, making the rules, and walking to the bank. We have the money, we have the brain power. The United States now has the highest measured wealth of any nation ever in the history of the world. We could rebuild our cities, we could create the kind of buying power and community well-being that will provide for peace. The guaranteed income is one way. Another way is to have always the availability of work in a nonprofit, in community service. A third is to start giving people training to develop skills where they can be self-supporting. You could come up with a cash supplement. Even conservatives have suggested a negative income tax to cut out the bureaucracy. If we were smart, we’d get rid of welfare and give people a family assistance like they do in Europe…


The problem isn’t even a problem. Automation and technology would be a great boon if it were creative, if there were more leisure, more opportunity to engage in raising a family, providing guidance to the young, all the stuff we say we need. America will work if we’re all in it together. It’ll work when there’s a shared sense of destiny. It can be done! It’s all there! What isn’t there is the leadership to create the kind of social network, the safety net, the distribution that would truly create a just and equal society…

We have to restore power to the family, to the neighborhood, and the community with a non-market principle, a principle of equality, of charity, of let’s-take-care-of-one-another. That’s the creative challenge. First, expose relentlessly the big lie that comes over the tube every night-that if you just go out and find that job, and work harder, it’ll all be fine. It won’t! There’s not enough work to go around and a lot of the pay is not fair. Unless you totally yank up that system and create a better one, unless the spirit changes, unless the heart opens, unless we confront power with the truth of our own unarmed but absolute fearless truth, we’re not going to overcome it. Evil is too embedded to be overcome by anything other than a spiritual challenge.

This is the same man who calls his conservative apponent Meg Whitman "a Nazi propagandist"!
Posted by rosey at 6:34 AM