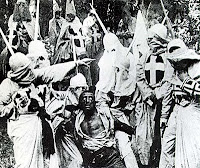 When the racists call others racist!


Here is a brief history lesson about racism in the United States and its progression through time thanks to Michael Zak:

1) the Ku Klux Klan was established by the Democratic Party

a. the Republican Party and a Republican President, Ulysses Grant, destroyed the KKK with their Ku Klux Klan Act of 1871.

2) The Ku Klux Klan was reborn in the early 20th century by Democrat President Woodrow Wilson with the movie premier (held in the White House) of “The Birth of a Nation”.

3) The KKK so dominated the 1924 Democratic Convention that Republicans, speaking truth to power, called it the Klanbake!

5) The notorious police commissioner Bull Conner, who attacked African-Americans with dogs and clubs and fire hoses, was both a Klansman and the Democratic Party’s National Committeeman for Alabama.

6) Starting in the 1980s, the Democratic Party elevated a recruiter for the Ku Klux Klan, Senator Robert Byrd (D-WV), to third-in-line for the presidency.

The former Grand Dragon of the KKK, Byrd was rewarded by becoming the longest serving US Senator in US history. His death also ushered another record in the history books when his body was placed in the Senate Chambers to lie in state. This has never before occurred with any Senator.

So, when the NAACP, Democrats and socialists say that Republicans and the Tea Party movement, who align themselves with American principles – racist, they are trying to rewrite history to elude their guilt for standing with those who are – racist…..
Posted by rosey at 8:54 AM