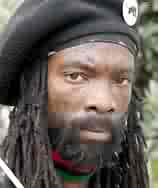 During the election night voting, in Philadelphia, three black uniformed black panthers positioned themselves at a polling station and intimidated white voters with hate filled speech, intimidation tactics and threats of violence (as they were armed).
Now the Justice department dropped the charges against the three at the request of the Obama White House (Oxymoron).
Was the case weak on he merits? Was the witnesses tainted or biased? Were the charges unwarranted? Before I answer these three questions, I will fill a little history of the defendants and the event that led to the court case and the subsequent legal actions and the decision of Obama and Eric Holder to drop the case on the eve of a court decision.
First, you must keep in mind that all three defendants had not attended nor legally responded (pleadings) to any and all official court actions against them which in itself would place them in a "default" position (in other words, by their inaction the Government case would win automatically).
So regardless of the evidence, witnesses reliability or strength of the case of the "plaintiff" the defendants would have lost by default.
The three "black panthers":
New Black Panther Chairman Malik Zulu Shabazz - According to the "New Black Panther Party website who advocates "Freedom or Death":
Note: After reading this webpage history of the group and it's leader, in their own words, one must seriously wonder why this militant Islamic group is not on the "DHS Left Wing Extremist Group list of most dangerous organizations"
http://www.newblackpanther.com/attymalik.html
New Black Panther Philadelphia Chairman "Minister King Samir Shabazz":
According to Gates of Vienna - "The total destruction of White People"
http://gatesofvienna.blogspot.com/2008/10/total-destruction-of-white-people.html
In the Ministers own words:
"New Panthers’ War on WhitesSome people wear their heart on their sleeve.
Minister King Samir Shabazz wears his on his forehead. Right between the eyes.
“If you want to stop the revolution, that’s what you got to hit,” Shabazz said, pointing to the target tattooed onto his forehead. “I fight my oppressor, and I give him the target.”
Shabazz is chairman of the New Black Panther Party’s Philadelphia chapter. In black beret atop dreadlocks and a black military uniform, he spends most weekdays near City Hall condemning “crackers” and exhorting black passers-by to rise up against their “slavemasters” — and to give him $2 for the party’s semi-annual newspaper.
Minister Shabazz outlines his political program:
On whites: “I’m about the total destruction of white people. I’m about the total liberation of black people. I hate white people. I hate my enemy…”
On Jews: “I don’t care how much they try to promote the Jewish Holocaust. The African people have suffered a hell of a cost…”
On Barack Obama and voting: “He’s a puppet on a string. I don’t support no black man running for white politics. I will not vote for who will be the next slavemaster.” Besides, he added, Obama is “a Negro who doesn’t even support reparations for black people in America.”
On white supremacists: “They’re sissies; they want to put their feelings on a flier. Well, come into the black neighborhood with that rhetoric and we will show you what a strong awakened black man looks like.”
Jerry Jackson - According to the Washington Times Editorial:
"One of the defendants, Jerry Jackson, is an elected member of Philadelphia’s 14th Ward Democratic Committee and was a credentialed poll watcher for Barack Obama and the Democratic Party when the violations occurred. Rather conveniently, the Obama administration has asked that the cases against Mr. Jackson, two other defendants and the party be dropped.
"The following video was shot at the time of the incident, so do not take this authors word for it, you decide after viewing.
http://www.youtube.com/watch?v=neGbKHyGuHU
The incident - according to the Justice Department press release:
http://www.usdoj.gov/opa/pr/2009/January/09-crt-014.html
The DOJ complaint:
http://www.usdoj.gov/crt/voting/misc/philadelphia_bpp_comp.php
When Obama tapped the racist Holder (and terror sympathisor) to become Attorney General it was for moments like this. When Obama tapped Sotomayor it will be to continue this trend at the highest court in the land. She has already proven that she is a racist and a sexist that will continue to suppress equal justice and protection under the law (if you are black) and give the bums rush to those of the white persuation....
Posted by rosey at 9:56 AM