A simple name change will do! 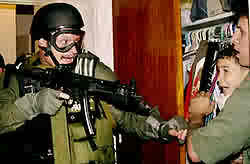 The Obama Administration vowed, as a campaign promise, to shutter the detention facility at Guantanamo Bay. To keep this promise his first act as President was to sign the executive order to do so within one year.

Since that time we have learned that Eric Holder has promised to release 17 Chinese Terrorists that were rounded up in a Tora Bora terror training site into American cities which have caused a great deal of concern about safety issues.

The Department of Homeland Security has warned against doing so as well as Obama’s own intelligence and military advisors. Despite these objections, it was learned that the President has ordered the release anyway and the release is imminent.

Yesterday, the Democrat controlled House passed with War Budget at a whopping $92 billion dollars, yet there was not a single dime in it to handle the release of these inmates? The leading Democrat held a news conference and was asked about the omission of funds and told us that because the President has not presented Congress with his plan on Guantanamo nor has he provided the individual threat assessments on these 17 individuals requested then no money.

Furthermore, once those two requests are fulfilled by the President, then and only then, can he come back and request the funds so all of this brings about the news conference today having Holder in front of Congress telling them that the Administration will not release any terrorists on American soil.

When pressed about whether this means that those 17 Chinese terrorists are not coming after all Holder dodged the question and reasserted his pledge that no terrorists will be coming to American soil.

We already know that this Administration is very big on vernacular change with words that describe terrorist acts to “man made disasters” or “war on terror” to “overseas contingency operations”.

So it begs the question Mr. Holder – will the Obama Administration rename the terrorists from the detention center to something else or maybe just dropping the terror label from them altogether to qualify them for admission?

We already know that Obama was born in an Islamic Country and has yet to prove he is qualified for the office (which is still in the courts and many different jurisdictions from Congress to the FBI) and that Obama has reached out to terror states while shunning allies while his Attorney General has sided with terror when, during the Clinton Administration acting as Deputy Attorney General helped in the pardon of 17 convicted FALN terrorists as well as two Weather Underground members.

Holder was also responsible for the armed raid that took 5 year Elian Gonzales in the cloak of darkness from the clutching arms of his family to send him back to Cuba when his mother died on the trip to flee that Communist island in 2000.

Holder was also responsible for the WACO raid where US military troops were used against Americans on American soil.

Obama and Holder are OK with utilizing deadly force against those they perceive as enemies (5 year old children and religious men, women and children) yet they are spineless when it comes to Islamic terror.