According to the MSM, Bayh moderate! 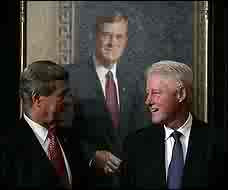 The “hollowing out of the middle”!


Ever since Evan Bayh announced his decision to retire the MSM has labeled him as “another moderate politician” that will leave in his wake, an even more partisan electorate. They use this moniker of “moderate” as if he is a politician who has maintained his political life in the middle of the road and as such is ending up road kill.

The dynamic that actually drives these politicians to the door is simple – they do not act or vote as the public wishes them to. The tea party movement has created an open door policy for those who wish “flight over fight” for their seats and a boot for those who think they can survive an election.

In the process of researching Bayh’s voting record to substantiate the MSM’s claim of his moderate nature I can pinpoint this dynamic on the first vote I came across. The vote was to enact cloture on the nomination of Craig Becker for the National Labor Relations Board. This is another of the SEIU nominations of Obama.

“The controversy surrounding the nomination is due principally to Becker’s background, which many believe displays an anti-free-market and pro-union bent. Becker is a labor lawyer who has served as associate general counsel to the Service Employees International Union (SEIU) and the AFL-CIO. For the past 27 years, Becker has taught and practiced labor law and written articles expressing extremely pro-union, anti-business views.”

The Obama nomination is another attempt to push the “Card Check” without the need to involve the Senate or House votes. This is evident by the following article that was written by Stuart Acuff (Utility Workers Union of America, Chief of Staff and Assistant to the President) in the Huffington Post (see exerpt for Obama’s plan to circumvent the Legislative Branch by Executive fiat):

“Most importantly, we are very close to getting the support necessary to pass the Employee Free Choice Act which would simplify and streamline organizing, effectively punish employers who violate workers rights with $20,000 civil fines and triple damage back pay for firing workers, and force the Financial Elite to bargain in good faith with unions by allowing unions to seek arbitration for recalcitrant employers.

The legislation has the support of President Obama and the US House of Representatives which passed it 241-185 in March of 2007. The Employee Free Choice Act has the support of a majority of the US Senate. But under the current rules in the Senate you need not a majority -- 50 votes-- but a super-majority of 60 votes to move legislation to where a vote to pass it can even take place.

We are very close to the 60 votes we need. It we aren't able to pass the Employee Free Choice Act, we will work with President Obama and Vice President Biden and their appointees to the National Labor Relations Board to change the rules governing forming a union through administrative action to once again allow workers in America access to one of the most basic freedoms in a democracy--the freedom of speech and assembly and association so that workers can build the collective power to challenge the Financial Elite and Get America Back to Work.”

In all his glorious moderate form, Bayh voted yes on the Cloture (which failed to pass by a vote of 51 Democrat Yeahs + 1 Independent Yeah to 31 Republican Nay’s and 2 Democrat Nays).

I was curious, who were the two Democrats that voted along with the Republicans to kill the Cloture? Answer – Blanche Lincoln (D-AK) and Ben Nelson (D-NE). Guess who did not vote -- Mary Landreau (D-LA)?

“The lament of partisan gridlock is a well-worn element of lawmakers' farewell speeches. Former Republican Senate leader Bill Frist of Tennessee, a physician, lectured his colleagues about it on the way out the door in 2006. Former Republican Sen. Trent Lott of Mississippi appeared with former Democratic President Bill Clinton and former GOP House Speaker Newt Gingrich earlier this year to urge the parties to get along.

But tellingly, no Republicans were present in the Senate when Democrat Paul Kirk, turning over the seat held by the late Sen. Edward Kennedy to Republican Scott Brown earlier this month, spoke about the lack of comity in the chamber.” - AP

The notation above about Bill Frist as a moderate in a way is true. He was more liberal than the voting public wanted from an elected leader. Take, for instance, the following comment on Frist by WND:

Frist was awarded a "D" by Gun Owners of America for his voting record of opposing the Second Amendment rights of U.S. citizens. He was also awarded a "D" lifetime rating by Americans for Better Immigration for his voting record of supporting unrestricted open-borders immigration and amnesties for millions of illegal immigrant law-breakers. As objectionable as Frist's voting record is on the Second Amendment and border-security issues, his record on abortion is even more troubling to social conservatives.”

The fact of his departure can be laid at the feet of his Amnesty aspirations (which mirrored GW Bush & John McCain). This was one of the original grass root uprisings against big government intentions over the wishes of the little people. It was this uprising that killed the legislation for amnesty.

Then you have Trent Lott who the MSM tells us is moderate and again he is moderate in their eyes because he talks and acts like a Democrat. Take the Immigration issue back in 2007 when the Republicans were working in a bi-partisan fashion to give illegal aliens amnesty against the American public wishes. Here is what he said about that defeat:

“Comments by Republican senators on Thursday suggested that they were feeling the heat from conservative critics of the bill, who object to provisions offering legal status. The Republican whip, Trent Lott of Mississippi, who supports the bill, said: “Talk Radio is running America. We have to deal with that problem.”

Finally, the telling pabulum that the AP article is feeding us has to do with the following quote to their article – “Former Republican Sen. Trent Lott of Mississippi appeared with former Democratic President Bill Clinton and former GOP House Speaker Newt Gingrich earlier this year to urge the parties to get along.”

Lott, Clinton & Gingrich get together, hold a press conference to plea for the following:

“So why were the three old foes together for an hour of handshakes and happy reminiscences? " I thought it might be a good time for us to show that a president, a speaker, the leaders, can find a way to come together," Lott explained. "If three good ol' boys from the South like the ones you've heard today can find a way to get it done," he said, "I know the outstanding leaders that we have in the Congress . . . can get it done."

The AP story wants us to believe that even the “good ol’ boys from the south” can get it done so can Congress and the Senate pass Obama’s policies. What a joke. In the end all you have to do is look at the most recent vote that Bayh cast to see how extreme left he is but more importantly how out of step he is with the voting public.

Bayh last voted on the following legislation to raise the public debt:

The battle between Democrats and Republicans have reached such a point that both parties (which look, feel and act exactly the same) want the public that represents tea party principles to think that the middle ground is being eradicated in order to get them to think left and abandon the right priciples in which they believe.  It is true that there isn't a moderate anymore, it is left v. right but the issue here is socialist v. conservative values and not party line platforms and platitudes.  The MSM will not trick us anymore with their pabulum!
Posted by rosey at 11:18 PM