Democrats throw ACORN under the bus, SEIU is now driving that bus! 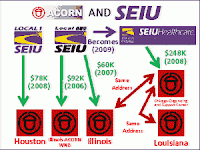 When the ACORN sting video’s surfaced ACORN began its death spiral. It is like rats leaving a sinking ship when democrats and Governmental institutions cut or severed their relationships with the organization.

The House and Senate, Census Bureau, IRS and Bank of America all led the charge with visible press coverage of the mass exodus. There is a chorus of Americans singing this praise but they should stop, take a breath and open their eyes because even though ACORN is now qualified to receive “hospice” benefits their sister organization has remained intact and poised to step into the voids that ACORN has created. This organization is the SEIU!

I have written that this past Sunday, Obama said in an interview with George Stephanopoulos ““Frankly, it’s not really something I’ve followed closely. I didn’t even know that ACORN was getting a whole lot of federal money” and he will live to regret these words because just as ACORN and the SEIU are tied to the hip, so is Obama with the two. Obama has repeatedly tried to distance himself from ACORN as just a minor and passive relationship ever since the Democratic Presidential Primaries and throughout the Presidential election campaign. The reality of their relationship is anything but passive as we know that Obama went to work for ACORN directly out of college, he has represented ACORN in 2 lawsuits to force the “Motor voter laws” enactment and even trained their senior management in community organizing tactics.

As Obama proclaims his distance and ignorance the truth is another matter as it was just learned that his appointee to the White House Political Director (the same post that Karl Rove held under the Bush Administration) is a long time ACORN political director under Bertha Lewis (ACORN CEO) and long term registered lobbyist for the SEIU. Patrick Gaspard has intentionally remained out of the press spotlight for obvious reasons – Obama did not want you to know his background with ACORN and SEIU.

With Gaspard running the “political” aspect of the Obama Whitehouse it gives ACORN and SEIU the President’s ear at all times. It may take a little time before the connections are made in the MSM (ala Van Jones) and the information will have to be related by Conservative alternative media sources in the interim, but it will eventually.

Obama and the Democrats are playing “three card monte” with the ACORN controversy as they realize they are now akin to a toxic waste dump. They are throwing ACORN under the bus because they have SEIU up their sleeve to fill the bill (no pun intended).

The American pushback on Obamacare with town hall meetings is the first that comes to mind. When Obama briefed Democratic lawmakers prior to the August recess he stated “If you get punched, punch back twice as hard” and sent SEIU to the Democrats aid by posing as town hall participants (you remember the purple shirts). It also seems as though they took the Presidents words quite to heart as the day after his briefing four SEIU members assaulted a lone town hall protester who was handing out “don’t tread on me” flags to participants.

SEIU gave the Obama campaign $85 million dollars and was rewarded with the hiring of dual ACORN/SEIU member Patrick Gaspard as well as Andy Stern who is one of the framers of the Obamacare spearhead.

During the campaign Obama raised $750 million of which it was reported that $426.9 million came from “foreigners” and individuals that have yet to be identified over the internet.

ACORN Independent Advisory Council, what is it? It is the vehicle for which ACORN plans to defend its image due to the recent video sting operation. The council will advise and hand select an “independent auditor” for ACORNs internal investigation. According to Politico.com “The advisory council includes John Podesta, head of the Center for American Progress, a liberal think tank; Andrew Stern, president of the Service Employees International Union; and former Maryland Lt. Gov. Kathleen Kennedy Townsend.

Andy Stern is the international president of SEIU and is also an ACORN “Independent Advisory Council Member”. This is yet another example of the two organizations being tied to the hip and inside the Obama Administration. Stern held a press conference denouncing those who attack ACORN:

“"Let's be clear who we are talking about -- call them attack dogs, call them Teabaggers, call them Glenn Beck -- these are the same folks who cheered the policies that crashed our economy. Who make up lies about death panels to try to kill healthcare reform. Who scream about democracy while denying workers a voice on the job. Who target anyone who poses a threat to a status quo that for too long has rewarded greedy CEOs while leaving people who work out in the cold.
"This is not the America we believe in.
"Their lies, their stunts and their smears will not silence us. ....
Does this man sound as though he will actually pick an outside auditor that will be fair?

Does this man sound as though he will actually pick an outside auditor that will be fair?

This internal audit that was called together by ACORN CEO Bertha Lewis reminds me of another “internal audit” that the new Obama Administration had to convene in the wake of the “Blagojevich” Senate Seat investigation. Both of these internal investigations (ACORN and White House) had one name prominently appearing in both – Andy Stern. Though Stern was not considered, at the time, to be a White House Staff member under investigation it was found that he was knee deep in discussing the Senate Seat with the embattled ex-governor. In exchange for naming Valerie Jarrett to replace Obama in the Senate, Andy Stern would give a coveted position at “Change to Win” an SEIU affiliate. This is according to the charges against Blagojevich.

With all the eyes on ACORN and the speed everyone is abandoning them it is prudent to keep the eye on the other ball in play -- ACORN surrogate twin SEIU!

Fortunately there are some members in Congress doing just that.

http://biggovernment.com/
Posted by rosey at 8:24 PM