From: Obama/Dems, To: Silent Majority 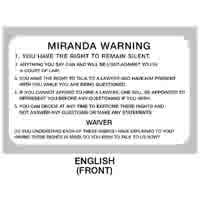 "You have the right to remain silent!"

Over the past 30 days the majority of Americans have been flooding townhall meetings, email "in boxes" of Senators and Congressment and the White "snitch-line" to self report on themselves in an effort to pursuade the ruling elites to "stand down" on their leftward path.

He points out that in the "age of Obama" something is happening to thwart his agenda and that is coming from the right.

Poll after poll show that Americans are actually identifying with the "town hall" protesters and not with those who have labelled them "evil-mongers, thugs, rightwing extremists and un-American".

In fact, it is the pressure of those who take their civic responsibility to actually rise out of their living rooms and protest that have forced the first cracks in the wall of these socialist by the mere fact the socialists are starting to throw concessions at the opposition (end of life counselling, public insurance option and taxing benefits). After throwing these concessions out to the public it only accomplished the solidifying effect of the right and alienated and angered the left of their party.

When the Obama campaign said "Hope and Change in America" we didn't mean "Changing America into something we do not recognize".
The MSM said that those who oppose the "stimulus bill" will be doomed to failure -- guess what the conservatives were correct and the stimulus was anything but. The MSM said those who oppose Sotomayer for the Supreme Court would hurt their party -- not. The MSM said that those who rallied to the side of Sgt. Crowly would hurt their party -- not only NOT but he was just given a standing ovation at the police convention yesterday.

With Congressional approval ratings in the single digits and quickly plummeting poll numbers with the President it brings me to the question of the day. With control of the White House, Congress and the Senate -- Why can't they pass this bill? They have the power (or so they have been telling us repeatedly by their actions)!

Wrong, it is the power of the people who have historically been silent and have risen again from their couches to show those pesky elites just who has the power. The message and the battle lines are clearly articulated -- pass this bill at your own political peril!
Posted by rosey at 11:25 AM