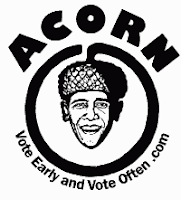 Innocent organizations do not fire innocent employees after fraudulent and bogus videos are release in the "court of public opinion" vs. a "court of law".

Finally, after the second tape was released showing the "pattern" of corruption was not an isolated instance (as ACORN wants us to believe by their protestations of innocence after the first tape was released) it now devolves into a "conspiracy to cover-up" the initial crimes, which I believe Woodward and Berstein said it best during Watergate when they opined that the "cover-up is worse than the crime itself".

Now, we (the public) are on our "fourth" taping of this rampant corruption of crime purpetrated by ACORN staff members and this latest is a doozy. The ACORN worker actually admits to killing her husband then "matter of factly" tells the undercover journalists that she will go across the street and threaten Mr. Green with his life if he divulges any of the conversation that they had together.

So, let's take a look at his perspective of "innocent until proven guilty" which correct me if I am wrong, believe him to mean that the organization ACORN is not guilty of the crimes that their "low level" employees perpetuate.

Never mind taking into account that ACORN has had many low level employees being investigated by the FBI and the Dept. of Justice on the "voter registration" side of their business. Here too, ACORN hierarchy maintains that these lower level employees were not "towing the company line" and were isolated instances of individuals trying to get paid for "padding their sheets" with the knowledge that ACORN frowns on this practice.

The ACORN hierarchy is attempting to segregate themselves from the actions of their employees as if they are "squeaky clean" and a just and true non profit just looking out for the poor and disinfranchised. My reaction, or my counter to their (and Robairs) assertions of innocence is dispelled and disproved by the $1MM embezzlement from the organization by Dale Rathke (the Founder of ACORN and SIEU is Wade Rathke, Dales brother) and the subsequent cover up of that crime by Wade Rathke.

"The brother, Dale Rathke, embezzled nearly $1 million from Acorn and affiliated charitable organizations in 1999 and 2000, Acorn officials said, but a small group of executives decided to keep the information from almost all of the group’s board members and not to alert law enforcement.

Dale Rathke remained on Acorn’s payroll until a month ago, when disclosure of his theft by foundations and other donors forced the organization to dismiss him.

“[b]We thought it best at the time to protect the organization, as well as to get the funds back into the organization, to deal with it in-house,” said Maude Hurd[/b], president of Acorn. “It was a judgment call at the time, and looking back, people can agree or disagree with it, but we did what we thought was right.”

Here we have the President of ACORN covering up the crime of embezzlement because she thought it best to protect the organization. The "management handling" of the embezzlement was to have Dale Rathke pay $30,000 a year (from 2001 until 2008 when the embezzlement was no longer a secret he had repaid approx. $210,000) and as of 2008, an annonymous donor repaid the balance.

“A donor has offered to give Acorn the rest of what the Rathkes owe, and an agreement to that effect should be finalized in coming days, Ms. Lewis said.”

“But the fact that most of the handful of people who did not disclose the fraud when they learned of it eight years ago still work for Acorn or its affiliates concerns many of the group’s financial supporters.

“We’ve told them that when the process is ended, we’ll have a look at it,” said Dave Beckwith, executive director of the Needmor Fund, which has given money to some of Acorn’s charity affiliates for at least 10 years and was contacted by the whistle-blower in May.”

A Trib analysis of campaign finance reports showed Obama paid CSI for services that stood out as unusual. For example, CSI received payments of $63,000 and $75,000 for advance work. Excluding the large payments to CSI, the average amount the Obama campaign spent with other organizations was $558.82 per check on more than 1,200 entries classified as advance work.

Citizens Services Inc. is headquartered at the same address as ACORN’s national headquarters in . Citizens Services was established in December 2004 to “assist persons and organizations who advance the interests of low- and moderate-income people,” according to paperwork filed in . In a 2006 ACORN publication, Citizen Services Inc. is described as “ACORN’s campaign services entity.”

The amount Dale Rathke embezzled, $948,607.50, was carried as a loan on the books of Citizens Consulting Inc., which provides bookkeeping, accounting and other financial management services to Acorn and many of its affiliated entities.

The amount that Michelle Malkin reported as being paid out of Obama campaign to CSI (another ACORN entity) was $832,598.29

The difference between the two ACORN instances almost line up.

During the Democrat campaign between OBAMA and the other Presidential hopefuls these two issues surfaced that only OBAMA and ACORN would suffer over, Obama because his name and reputation as a community organizer for ACORN in his early years was already an issue.

When the embezzlement from ACORN was reported in MAY 2008 it coincides with the “fishy payment” out of “campaign funds of Obama. Was Obama the “donor” that paid ACORN balance of Dale Rathke to make the negative story go away that directly affected his chances at becoming President?