Between Barack and a hard place 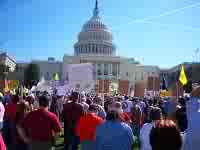 MSM coverage of anti-war protest, but mum on tea party?

Don’t get me wrong in spite of the lack of coverage and sticking their heads in the sand hoping the opposition just goes away (anti Obamacare opposition that is) the fact that the far left crowds are just as angry at Obama goes to show the precarious political position the Democrats are in. On the one hand, the far left will be angry at Obama if his healthcare policies fail to reach fruition. Though the left fringe crowd (his base) is a definite minority the President and the Democrats are in a no win situation which goes to show how incoherent it is to be Democrat.

Either way, the Democrats are in a bad spot and you can say that they will shoot the moon on healthcare because basically they have nothing to lose as they know they will get routed in the November elections. Their only hope is to appease the far left and get the only money they can from the Unions to make a show of it.

If they don’t vote yes, the Unions have already threatened their political lives by stating they will not fund them.

The Union money is their only hope for competing for further incumbency.

It should be bedlam later today as the House tries to vote on the bill. Something in me thinks they still don’t have the votes and as a result of the anti-Obamacare March yesterday already resulted in the “slaughter house rule” thingy.
Posted by rosey at 12:11 AM