Say hello to the man who will be responsible for infant deaths! 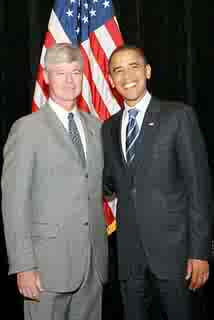 Stupak will go down in history as the “baby killer”!


So, he calls himself “pro-life” when in fact he is just another Democrat that will have the blood of innocents on his hands.

I have been telling every Conservative that praised this man for his “heroic” stance against the abortion provision within the bill that at the end of the day he is still “just another man with a “(D)” behind his name. Unfortunately for me, I was right. He has voted with the Democrats 96% of the time so there was no expectation of turning a corner here.

He sold out the future souls of countless Americans that will never see the light of day and will never have the chance for “Hope or Change”. I wonder if his Catholic faith will be enough to sustain him spiritually when the upcoming political bloodbath in the upcoming November elections aborts him from Congress.

Don’t let the door hit you in the ass on your way out.
Posted by rosey at 4:37 PM