“The King of Soul” has gone missing! 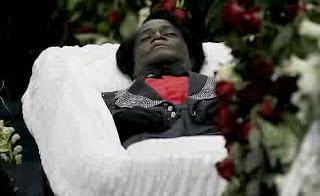 The body of James Brown is said to be in hiding! A case of "Wherabus Corpus" is afoot.


The late James Brown has gone missing and the illegitimate daughter said it is because she was pressing to have his body exhumed for autopsy which had never been done.

She believes that her father’s death was not due to natural causes and was in the legal process to have an autopsy.

LaRhonda Pettit came forward after the singers death and submitted to a DNA test that proved she was 99.9% positively his daughter.

Details will emerge when a full investigation is completed……
Posted by rosey at 8:54 AM