Stamp out the Health Care Legislation! 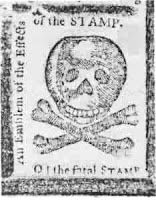 In 1765 the British imposed “the Stamp Act” on America’s Colonies.


In 1766 the British repealed their legislation.

“The Stamp Act met with great resistance in the colonies. It was seen as a violation of the right of Englishmen to be taxed only with their consent—consent that only the colonial legislatures could grant. Colonial assemblies sent petitions of protests, and the Stamp Act Congress, reflecting the first significant joint colonial response to any British measure, also petitioned Parliament and the king. Local protest groups, led by colonial merchants and landowners, established connections through correspondence that created a loose coalition that extended from New England to Georgia. Protests and demonstrations initiated by the Sons of Liberty often turned violent and destructive as the masses became involved. Very soon all stamp tax distributors were intimidated into resigning their commissions, and the tax was never effectively collected.

Opposition to the Stamp Act was not limited to the colonies. British merchants and manufacturers, whose exports to the colonies were threatened by colonial economic problems exacerbated by the tax, also pressured Parliament. The Act was repealed on March 18th 1766 as a matter of expedience, but Parliament affirmed its power to legislate for the colonies “in all cases whatsoever” by also passing the Declaratory Act. This incident increased the colonists' concerns about the intent of the British Parliament that helped the growing movement that became the American Revolution.”

Taxation without representation was the rallying cry that led to this repeal and thus the impetus for the “American Revolution”.

The current push to impose the Government’s will over the electorate is similar in nature and has become the modern day impetus for a new “tea party” grassroots movement. The constitution is suppose to protect us from tyranny of a run-away federal power grab and the compulsory nature of the demand that citizens purchase a product that the government tells you are required to do under penalty of fines and jail is, well, unconstitutional.

Further more, the way that the majority in power is handling this forced legislation over the condemnation of the majority of States and people is unconstitutional. If we let this unchecked power grab succeed, they have already announced further “non-votes” on immigration amnesty; cap & trade and a whole host of other intrusive and destructive socialist policies.

The word “Impeachment” has now reached the level of consciousness in the press when it comes to the President, Pelosi and the majority of those who have taken an oath to protect and preserve the constitution and have decided instead to abridge it.
Posted by rosey at 11:18 AM