Obama refuses to campaign for those who vote no! 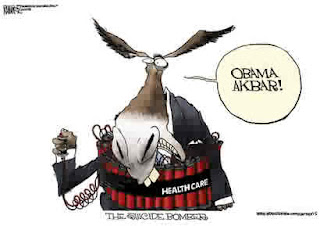 I think this should come as a relief!


It is a fact that what ever Obama seems to want and then travels to garner support for it, be it the Olympic Chicago bid, Governor Corzine or Martha Coakley, it ends in disaster. In fact there are jokes emanating from all quarters that Obama is “the kiss of death”.

To further the White House arm twisting they have now included another strategy – Any Democrat that votes no should not expect Obama’s help in the upcoming elections in the way of endorsements or actual appearances.

Talk about empty threats. This Administration, particularly Obama himself, is losing supporters in throngs, daily.

His threats are even less credible than his words.

I believe he should leave the arm twisting and threats to his Union thugs and sit this one out because he is generating little fear these days.

The audible sighs you hear coming from the Democrats are not out of fear, but instead are of a collective relief that he will not show up at their campaign events.
Posted by rosey at 4:38 PM