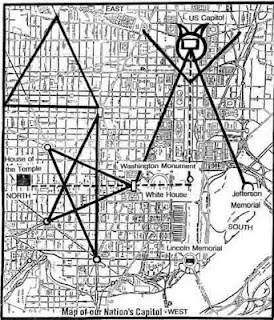 There have always been conspiracy theories when it comes to “secret societies” and the Masons are no exception. The Mason theories have gone back millennia and have become more pronounced since the inception of the US Dollar Bill during the Franklin Administration in 1935.


Masons have long been obsessed with symbolism and numerology. Some of the symbolism believed to be directly attributed to the Masons and their design of the One Dollar bill is such:

The dollar bill bears the likeness of George Washington (a devout Mason) and on his inauguration he wore a Masonic Apron that bore the “all seeing eye” symbol embroidered upon it (which sits atop the “unfinished pyramid”) on the reverse side of the bill.

According to conspiracy (History Channel):

Conspiracy theorists claim this is the work of an underground secret organization of elite men that are seeking world domination at some time in the future. Masonic officials deny this, of course, but a lot of the evidence -- on the dollar bill itself -- tend to support this. The Great Seal of the United States, shown on the reverse of the dollar bill, is the source of much of this symbolism.

On the obverse of the Great Seal is the eagle, our national symbol. This is shown on the right of the $1 bill. The eagle is holding 13 arrows in his talon, there are other objects 13 in number: leaves on the branch in the eagle’s other talon, bars & stripes on the shield, and stars above within the wreath. They claim 13 is a mystical number of the Masons. The number of feathers is also significant, 32 on the left, 33 on the right. Masons have 32nd degree and 33rd degree levels of study.

The reverse of the Great Seal, shown on the left of the bill, has the unfinished pyramid with the all-seeing eye above and the 1776 founding date in Roman numerals below, all Masonic symbols.

In 1935 the design of our current dollar bill was chosen by Franklin D. Roosevelt, his VP Henry Wallace insisted the Great Seal appear on the reverse. The conspiracy theorists note both of these men were Masons as the mystery still continues.

Most significant was the shape of the stars above the eagle in the seal. If a line is drawn through all it forms a six sided star. If this is superimposed over the reverse design five of the six points indicate a letter in the legend above and below. The letters form an anagram for the word MASON. That’s more than coincidence, it seems.

Finally, in an exercise that I just did I found another indicator that the “new world order” will begin in the year 2010 by following the numerology theory. The year of America’s birth and also found in the Roman Numerals on the dollar bill is 1776.

Do you believe? How many times have we heard the Obama Administration, politicians on both side of the aisle as well as the Chinese, UN and other global leaders indicate a “new world order” recently?
Posted by rosey at 9:03 PM