What has Obama accomplished?, Other than blaming the Bush Whitehouse – still! 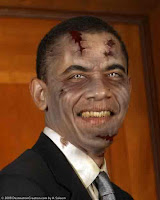 What we have now realized is that unemployment has hit 9.8% and Joe Biden admitting that “we all got it wrong” when assessing the true nature of the economic mess. Problem is that we he said we all got it wrong he can only mean the Democrats because the entire Republican party voted no (except for Arlen Specter who fled to the Democrat ranks shortly thereafter and the two Maine Senators who should be labeled Democrats anyway).

Bailouts:
The bank bailouts were intended, per Obama, to infuse those banks and thrifts with toxic waste on their balance sheets to free up credit and allow those who are nearing or in foreclosure to get relief.

What we have now realized is that those who banks took the money and continued to freeze credit and those who “reworked their mortgages” are still defaulting under the new terms (just 60 after doing so) and are again nearing foreclosure.

The auto bailout of GM and Chrystler were done because Obama, using his favorite phrase, were too big to fail. The American public overwhelming cried NO, yet Congress and the President did so anyway. Then after the big cash infusion we were treated to the “cash for clunkers” program (which was very successful).

What we have now realized is that the cash for clunkers program participants (dealers) are still awaiting reimbursement from the feds. The program was also rife with corruption as Hummers and large pickups were being sold through the program. The latest “retail consumer confidence report for August” was released that proclaimed a surge in consumer confidence (which was a direct result of the program) so the surge cannot be accurately called “confidence” as the program was temporary and has since sunset.

Finally, when is the MSM going to start hammering the failed economic policies that Obama has steered us into as they did during good economic times under Bush?