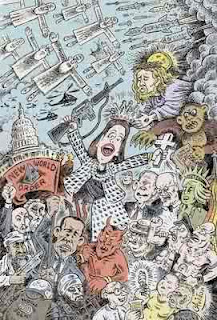 1) Administration tries to keep insurance cooperatives (Humana) from communicating with their own customers!

4) Threatens the Chamber of Commerce!

6) President himself says he will "call out" those who disagree with him, that he will "not abide" us, that his opponents are "filling the airwaves with deceptive and dishonest ads" when the ads are actually factual!

7) Repeatedly accuses his opponents of using "scare tactics," yet in the next breath says "if we do nothing, our deficit will grow. More families will go bankrupt. More businesses will close. More Americans will lose their coverage when they are sick and need it the most. And more will die as a result. And then, having said that doing nothing will make more people die, he accuses those who don't agree with him of wanting to do nothing!

10) Tell an Arizona sheriff that he's not allowed to tell the press about his pickups of illegal aliens!

11) Fires Inspectors General who embarrass their friends, after telling one of them that he too isn't allowed to talk to the press!

12) Tells towns in North Carolina that they cannot hold nonpartisan elections because blacks need to know who the Democrat is -- even if the town itself is majority black and voted to hold its elections in a non-partisan way!

13) Condone vote fraud and voter intimidation when it suits their purposes!

15) Accuse Americans of being "a nation of cowards" on race!

16) Blame every problem on their White House predecessors!

17) Lock Republicans out of committee meetings then run out the back door to avoid voting on Democrat violations of ethics concerning “countrywide mortgage”!

18) Refuse to let the public have time to read legislation before it is voted on!

19) They vote on legislation that isn't actually even in one written piece yet!

20) Promise transparency, but they stonewall legitimate Freedom of Information Act requests on subject after subject!

22) Refuse to turn over information about the fired or disciplined Inspectors General yet press for special prosecutors relating to Bush Administration’s firing of US States Attorneys!

23) They won't turn over information about their decision to subvert Honduran constitutional democracy in favor of an anti-American leftist thug!

24) They won't turn over information about the New Black Panther decision and then lie about who made the decision!

25) Lie about their efforts to politicize recipients of government arts grants!

27) They have a communications director who idolizes mass murderer Mao Tse-tung!

28) They have a manufacturing czar who also speaks favorably about Mao!

29) They have a science czar who quotes Mao, and who says it is not unconstitutional to coerce abortions or to put prophylactic chemicals into the drinking water!

30) Their attorney general refuses to protect the civil rights of white people (unless the whites are gay)!

31) Their Justice Department drops cases against an allied governor of New Mexico!

32) Unilaterally violate the sanctity of contracts (and probably the Constitution) to gut the ownership rights of secured creditors and expand the unearned ownership by the unions!

33) Threaten businesses that won't jump in line behind their takeover plans!

35) When faced with complaints about utterly abusive new regulations that will criminalize people holding garage sales and put hundreds or thousands of businesses out of, yes, business, they loudly boast that "there's a new sheriff in town." And they invite foreign authorities, at the expense of our civil liberties, to regulate us further!

36) They say their opponents are all racists, or they say that honest citizens speaking up of their own free will at town hall meetings are thugs and haters and rabbles and mobs and should probably be shut down!

When it get's larger, I will break it down into catagories like "Transparancy", Constitution, Race Relations, Business or anti-business, etc. Once completed I will attempt to publish in some manner (probably a "coffee table book" for conservatives!
Posted by rosey at 10:31 PM