ACORN headquarters raided by investigators, In order to preserve evidence 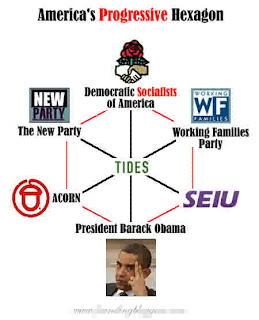 Do you remember when ACORN was on the ropes with the media (not the MSM a from a couple of twenty-somethings from Big Government.com) and Bertha Lewis (ACORN’s CEO) went before any and all microphones to say that they were an open book and were only guilty of poor management of low level employees that they do not control.


She went on to tell the world that they (ACORN) have instigated an internal panel of objective outside advisors to get to the bottom of any wrongdoing and also advise a way forward in the spirit of their openness.

In an interview with Chris Wallace, Darrell Issa (R-CA) issued a challenge for Bertha to “come to the Hill” and stand before the Congressional hearings on ACORN and defend them from the allegations of corruption.

This was a chance to face accusation head-on, testify before Congress and put the issues to rest as she has attempted to do in the MSM. Here is an excerpt from the interview regarding the request:

” Rep. Darrell Issa (R-Calif.) challenged ACORN chief executive Bertha Lewis on Sunday to come before the House Oversight and Government Reform Committee to explain how her group used its federal funding, which Congress voted to cut off last week.

“Will you come before Chairman Towns … and give the kind of disclosure to where the Government Oversight and Reform Committee could know that you are doing work with firewalls, as you say, so the American people know that their dollars don’t end up doing political activities prohibited by law?” Issa, the committee's ranking Republican, asked on "Fox News Sunday."

Lewis would not commit specifically to go before the committee to explain how they group separates its charity, political and federal funding.

“That’s Congressman Issa’s opinion. … We will do whatever we need to do to make sure that folks understand the work that we actually do and that we’ve been doing for 40 years,” Lewis told Fox’s Chris Wallace.”

“We will do whatever we need to do” -- unless it involves answering to the allegations in an atmosphere where ACORN cannot control the outcome of the information.

This brings me to the recent raid (today) of the ACORN headquarters. The raid was conducted because of the ACORN attorneys disclosure that two employees left the company and actually took two of the computers with them out the back door.

It appears that Bertha Lewis and ACORN are doing their part to uphold the credibility of their little company.

As a result, there are now two federal grand juries seeking information and exploring charges.

Finally, that independent panel that ACORN convened to “get to the bottom” of allegations just lost the only member that did not have a “dog in the race” leaving the hand picked schlubbs to whitewash the report.