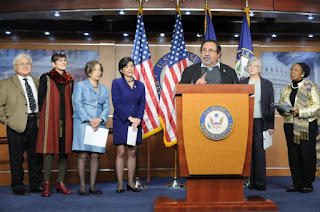 Are the Democrats communist?

On April 19, CNN's Soledad O'Brien asked Rep. Allen West to name those Democrats in Congress he said are communist.  In typical West style, he hit her with the truth.  West replied "Communist, progressives, Marxist, statists...I'm looking at ideologies.  I'm looking at the things they believe in....."

It doesn't take a brain surgeon to compare the ideologies that West refers to.  All you have to do is look for your by following the links provided in this article here.

What is alarming is the fact the the youth of America do not have experience, first hand, with communism like older Americans.  The ideology is packaged in flashy multi-media sound bytes that appear cool and hip and the young are lapping it up without truly understanding how many have died under Communist and Marxist rulers.  They look at Che' as a cult icon to be worn on t-shirts while ignorant of the murderous and oppressive suffering under Cuba's Castro.

It is equally disturbing that the youth are being indoctrinated by the communist in our schools with out the ability to counter the damage being done.

No, what West was implying is members of Congress that hold these ideologies of Communism and Marxism while writing our laws and funding those aims.


The Congressional Progressive Caucus, which West eludes, in part, is literally the same as the Communist Party USA.

1) "To uphold the right to universal access to affordable, high quality health care for all"
2) "To preserve guaranteed Social Security Benefits for all Americans"
3) "To ensure working families can live above the poverty line and with dignity by raising and indexing the minimum wage"

"To eliminate all forms of discrimination based upon color, race, religion, gender, creed, disability, or sexual orientation"

"To bring our troops home from Iraq as soon as possible"

Now, compare this platform to the Communist Party USA constitution:

Article VI, Section 3 lays out the following positions as "non-negotiable":

Among the points in the party's "Immediate Program":

"$12 minimum wages for all workers, national universal health care, and opposition to privatization of the United States Social Security.  Economic measures such as increased taxes on the rich and corporations, strong regulation of the financial industry, regulation and public ownership of utilities, increased federal aid to cities and states, opposition to the Iraq war and other military interventions, opposition to free trade treaties such as the North American Free Trade Agreement (NAFTA), nuclear disarmament and a reduced military budget, various civil rights provisions, campaign finance reform including public financing of campaigns; and election law reform, including runoff voting.

There are 76 members of Congress that makeup the "Congressional Progressive Caucus".  Some of the infamous ones are Nanci Pelosi, Keith Ellison, Maxine Waters, Sheila Jackson-Lee, Emanuel Cleaver, Jesse Jackson Jr., and Bobby Rush.

Does anyone with a brain honestly believe that these particular members of Congress, who have sworn an oath to uphold and defend the Constitution of the United States, actually adhere to it?

Look at the racist, terrorist and communist Rep. Bobby Rush as a prime example.  It is of no surprise then that the thug Rush donned his most comfortable attire on the "Floor of the House" (hoodie) in protest.  Rush received immediate support from Comrade Pelosi when she came to his aid and said "I think that Bobbie Rush deserves a great deal of credit for the courage he had to go to to the floor in a hoodie, knowing that he would be told he was out of order."

If any of the readers of this article think this author is racist and incendiary in my comments describing Rush as a "racist, terrorist and communist" then please take the time to view the CBS news segment that aired on December 4, 1969.  Please keep in mind that Bobby Rush was a prominent leader in the Black Panther Party that terrorized America during the period.  Take a close look at the literature that the police confiscated from Rush's apartment at the end of the segment.

It is no different when you compare the Congressional Progressive Caucus, Communist Party USA, Union platforms, ACORN etc.  The problem is not confined to the halls of Congress but to powerful organizations that are aligned with the very ideologies that West referred.
Posted by rosey at 4:04 PM No comments: