On May 8th of this year a curious news item hit the wire when President Trump received a request from Rod Blagojevich to pardon him. In August of this year, President Trump indicated he was giving it serious consideration and went as far as saying “Blagojevich has been in jail for seven years because of a phone call where nothing happens”. Does this in any way shape or form sound familiar (Trumps Ukraine phone call)? In essence, Donald J. Trump has empathy towards the man who was convicted of conspiracy charges related to his attempt to sell the appointment filling the vacated Senate seat of Barack Obama.
Rod Blagojevich was certainly guilty of trying to leverage a Senate seat for personal enrichment, but his biggest mistake was that Obama himself was attempting to do the very same thing. America was introduced to Chicago style politics.
Obama entered his Presidency under a cloud of corruption. There was a big to do when Obama’s name surfaced in court filings over the matter. This is when America was introduced to a favorite trick Obama has used many times since, the internal investigation. If you remember it was Greg Craig (Obama White House Council) who would look into the matter and then wrote the report exonerating Obama from any wrongdoing. A little history on Greg Craig. Mr. Craig was one of the trial defense attorneys for John Hinkley Jr. (Regan would-be assassin). Mr. Craig also represented Elian Gonzales father from Cuba that resulted in his return to the communist country. So Obama sidesteps controversy and Blagojevich takes the fall. Could it be that Donald Trump sent his consideration of pardoning of Blagojevich as a way to turn him into a participating witness to the crimes of Obama?
Coincidentally, at the same time period as the Pay for Play scheme for Obama’s Senate seat, Trump questions Obama’s birth certificate publically and is labelled a “birther” (think about everything Trump has said (100%) and labelled as lies that actually were true). Trump understands if the current investigations penetrate into the Obama Whitehouse, then a whole new can of worms will be opened. The Russian collusion, Mueller investigation and now an impeachment push over a “phone call where nothing happens” are just the opening act to divert attention away from the iceberg sitting just below the surface.
For instance, when the evidence is finally released showing the Russians innocent of “hacking the DNC servers” and showing the breach of these servers came from inside the DNC (Seth Rich) then all bets are off. Not only will it prove there was no “there, there” as it pertains to Trump colluding with the Russians to win the 2016 elections, but instead was an inside job. Seth Rich was upset at how the DNC was manipulating the party to sabotage Bernie Sanders chance at winning the nomination over Hillary. The unsolved murder of Seth Rich will jump to the forefront. So is it any surprise that the DNC refused the FBI's demands for their servers they claimed hacked by the Russians? Instead the DNC hire an outside security firm (Crowd Strike) to back the Russian hacking claim. Just as the Obama admin had Greg Craig perform an internal investigation upon his transition to get rid of the pay for play Senate seat claims, the same tactic was used by the DNC when they hired Crowd Strike.
Again, coincidentally, at the same time period in the run-up to the 2008 Presidential elections the State Department passport files of Presidential candidates (McCain, Clinton and Obama) were breached. It was found the culprits were “outside independent contractors” from a security firm owned by John Brennan . Did Brennan scrub Obama’s passport files (which would show Obama’s birth of record) while at the same time digging dirt on Obama presidential political opponents. Again coincidentally, the only person who promised to cooperate in the breach investigation was found murdered. Obama wins the White House and who does he bring in as the White House Intel chief? John Brennan. Was this the quid pro quo for his help with the breach? Then Brennan is elevated to CIA chief. The rest they say is history.

At a time when Mao ornaments are hung on the White House Christmas tree Brennan, the self-admitted former Communist (who voted for Gus Hall for President) sits in the White House and then the Director of the CIA.  What could go wrong? If Obama is ever a true target of federal investigators they will find all kinds of things. Things like Obama's true birth origin. If it's Kenya, then every single thing he signed or approved will have to be reversed. Talk about a constitutional crisis. 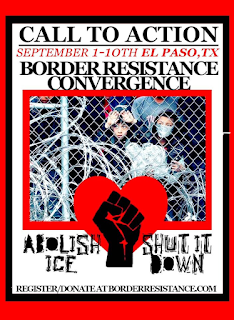 So, Antifa is leaving the safe confines of Progressive Radical locales and going on tour. This is according to Andy Ngo's (journalist attacked in Portland) tweet on July 29.   The recruitment tour starts in Santa Cruz then Oakland, Olympia, Portland, Seattle, Minneapolis and Chicago. They will all then go to El Paso, Tx.

Is it coincidence that a 21 year old man perpetrated a mass shooting in El Paso today.
Posted by rosey at 10:34 PM No comments:

Blog of the Month

I am back after a long sabbatical to write a couple of books. I have, in the past, found and spotlighted blog sources that warrant highlighting for the content and relevancy in practicing the "power of truth".

For those who follow my blog, please take a look at:

Irate, Tireless Minority
Posted by rosey at 9:05 PM No comments:

Now that the tide has turned, President Trump has wasted no time pressing ahead exposing the Deep State. I'm not even sure calling them the Deep State is appropriate to convey the traitorous actions perpetrated for God knows how long. The information the administration has released to date is hard to keep up with. The hard facts are corroborated through documented evidence and the picture it paints is massive in size and it's tentacles spread throughout the swamp known as Washington DC. It seems every day a new and documented revelation is disclosed cementing the publics fear that we are fighting for the soul of the nation and its very survival. In addition to the Russian Hoax investigation into the investigators continues its secretive slow walk to destiny, we have other investigative fronts opening that are seemingly unrelated. For instance, the Jeffrey Epstein case playing out in a courtroom has many of the players involved in the Russian Hoax as well. Names have come to light through Epstein flight logs (Lolita Express) such as Bill Clinton. There are whispers that the whole Epstein affair is a CIA blackmail operation. This conspiracy theory isn't so far fetched given the nature of its former head, John Brennan. Epstein possessed a Bell Long Ranger 206L3 helicopter bearing a tail number of N474AW. The US State Department also has an aircraft (OV-10 Bronco) with the same tail number. The Epstein helicopter as well as the US State Department Bronco are both contracted through the same private military company called DYNCORP.

So, Brennan is where we shall start. The following are factual biography information on those in the investigative cross-hairs after the Mueller report:

1976 - John Brennan votes for Gus Hall (Communist Party) for President. Gus Hall was convicted and sentenced for teaching "the violent overthrow of the US Government".

2008 - State Department Passport Office breach. In the lead-up to the election of Barack Obama, a private computer firm owned by John Brennen had one of its employee's responsible for the breach of Obama, Clinton and McCain records. Three contract employees were implicated, 2 of them fired. The third employee was the one from Brennen company. This employee was cooperating with authorities when he was shot and killed (not unlike the Seth Rich DNC Wikileaks whistleblower murder).
Posted by rosey at 7:49 PM No comments:

Death by a thousand cuts


The 2016 US Presidential election has exposed many things the Democrats would rather remain in the shadowy world of the deep state. In many ways Tammany Hall lives on for the party as kings are selected by the few in smoke-filled backroom deals. The last election caught the deal maker’s off-guard when it became apparent Bernie Sanders was similar to Donald Trump as an “outsider” with a massive following. Though Bernie wasn’t a true outsider in the sense of political experience like Trump, he wasn’t a Democrat either. To the Democrat insiders, he wasn’t a “card carrying member”. This is why the kingmakers had to remove him. Their anointed one (Hillary) must have been horrified to see Sanders filling stadiums, like Trump, with the energy they could only dream of. We now know the DNC took him out under the leadership of Donna Brazile in conjunction with the Clinton camp. It still boggles the mind Bernie Sanders never pursued this legally, especially since the kingmakers are targeting him again for defeat.

How many times have we heard recently that the overcrowded field the Democrats have, or are trying to “out-left” each other? The entire field of candidates are floating extreme left positions. This is intentional as the chorus of extreme voices are diluting his platform. With each communist position they tout, the weaker he becomes. The longer this burgeoning field remains large his chances of success dwindle from “death by a thousand cuts”. In addition to his detested popularity, he is also hamstrung by the fact he is white and male. If you want to understand reality over what the MSM tells you through false polls, look to the crowds everyone draws to their campaign events. When you contrast or compare them, both Trump and Bernie filled each venue to capacity with exuberant voters. This was true in 2016 and it’s true today. Though it’s true Bernie is a flawed candidate (rich, white and an avowed socialist) he is the only one in the field of “D’s” that has a shot at Trump. This could be a problem for the king-maker’s plans to install their establishment choice for their candidate. They are fearful when dilution candidates drop out, one by one, their constituents may instead go to Sanders again. So, who will the eventual candidate be? Will they come from the overcrowded field already presented to the public, or will they trot out a last minute dark horse savior? This savior will have to be 10 feet tall and bullet proof to overcome Trump. Is this savior from the existing presidential candidate? Bernie Sanders thinks he can but can he overcome the Democrats before he even gets to Trump? It is not likely. So, who then?

Who is in the wings that has star power (like Trump and Sanders)? Who will the media embrace, as well as Hollywood? Who can reverse everything Trump has reversed that Obama relied upon for his legacy?

With the steady drumbeat of racism charges against Trump running amok in the MSM and Hollywood, the ideal candidate should be African American, or a woman. The utopian pick be both an African American woman with star power. Can you think of one that fits the bill? So clear the decks, a new captain will be at the helm of the Titanic and her name is Obama.