You want some answers 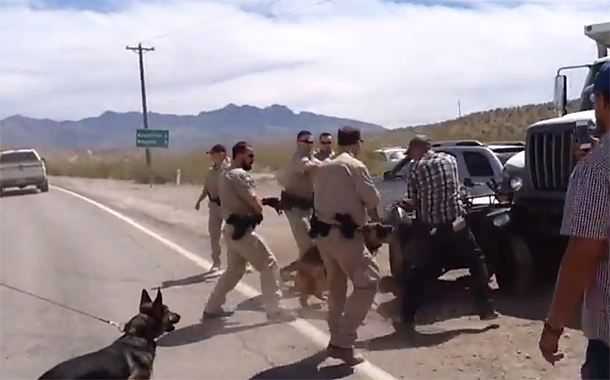 There have been a lot of questions that many Americans are asking these days because the landscape in which we find ourselves are quite foreign.

Here are a few!

Why is the Federal Government, through it's various Agencies, purchasing so much ammunition?

There are many answers to these questions when the BLM attempted to wrangle some cattle in the Nevada desert at the end of a gun.  During this heated operation that was ordered (though this is still debated because of the fingerprints of Harry Reid, China and Rory Reid all over it), organized and executed by the Bureau of Land Management it seems we are beginning to understand the need for the ammo.

The impetus for this armed action of the Federal Government over a private American citizen was an elusive unpaid cattle grazing fee.  There is an amount being bandied about in the MSM somewhere around $1 million dollars though the Government, through court transcripts never quantified this amount and it may be a little as a couple hundred thousand.  Be that as it may, it should send warning bells ringing that our Government is storming in, guns pointed, in order to collect a monetary debt.  The Bundy's were not targeted because of terrorism or gun running that would justify an armed incursion to bring them to justice.  They were targeted because of an uncollected monetary debt.  Through the years, the Government has had it's eyes on this land and first attempted to reclassify the grazing area as a habitat for a turtle that the other Government agency said was being endangered because it could not compete for the food that the cattle was consuming against.  So the MSM is now arguing that the Bundy's are law breakers therefore why shouldn't they be arrested, by force if necessary.  Then you have the angle that the MSM, Harry Reid and many other Democrats arguing that the Bundy supporters are domestic terrorists.  Of course these are the same domestic terrorists that are against the Federal Government and it's overreaching power grab.  You know, grandma and her friends who call themselves tea party activists.  The same people that Janet Napolitano and Homeland Security wrote those law enforcement memo's about.  The same people that have been holding training drills against in many US cities across the land.

We have gone from "Debtors Prisons" to "Debtors firing squads" here.  It is not enough that those in positions to use these over armed federal agencies to target individuals that disagree with them but that use of power is becoming more and more frequent.

In 2000, the INS stormed a private residence in Miami at gun point and took a boy to return him to Cuba.  Elian Gonzales.  Janet Reno and the Clinton Administration (with the help of Eric Holder) ordered it. 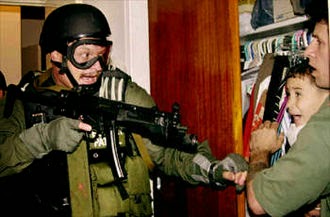 Some years previous (1993) to this action listed above, Janet Reno and President Clinton cut their chops on another government raid in Waco Texas.  76 people inside lost their lives.

The MSM has attempted to aid the BLM and their Federal handlers by painting the Bundy's as law breakers while ignoring the other explosive story that involves Harry Reid, his son Rory and his clients the Chinese Government.

SIT DOWN and SHUT UP already!

‘The debate over repealing this law is over,’ he insisted. ‘The Affordable Care Act is here to stay.’

Isn't it a curious thing that in the weeks preceding Obama's April 1st Rose Garden speech Democrats were trying to hide from their participation in shoving this monstrosity down America's throats.

Isn't it a curious thing that during the time that the open enrollment period for this monstrosity the Government could not come up with a coherent number of those who have actually enrolled yet on April first they have placed a highly specific number with a decimal in it in front of us.

Obamacare “is doing what it’s supposed to do; it’s working.

Isn't it curious that millions have been dropped from their current healthcare plans, that they have liked.  Why, because Obamacare is doing what it's supposed to do?

Isn't it curious that millions cannot see the doctors that have had for years and have come to trust as their primary defense for their families healthcare.  Why, because Obamacare is doing what it's suppose to do?

Now, according to sources who actually try to follow the "intended" consequences of Obamacare, the statistics bear a different story -- "Well, he allegedly got 7.1 million enrollees on paper, but let’s look at the myriad ways that number is reduced.

National Journal reports that an estimated 15 to 20 percent of these enrollees haven’t paid their premiums, which means they won’t be covered. So right off the bat, you have to reduce the number to between 5.7 million and 6 million, which means the figures already won’t work.

Instead of 38 percent of these enrollees being in the young and healthy category, Michael Tanner of the Cato Institute reports that less than 30 percent of enrollees are younger than 35.

Also, RAND Corp. estimates that only about one-third of the new enrollees were previously uninsured, which means that two-thirds of the 5.7 million or 6 million cannot properly be counted in these figures. So we have fewer than 2 million net new enrollees. But we’re still not finished.
In addition to this, RAND estimates that nearly a million more people lost their plan because of Obamacare and couldn’t afford to replace it because Obamacare mandates coverage of additional risks and causes premiums to increase.

Does that mean we are actually down to about 1 million net new enrollees?

Not to destroy your day further, but on top of all this, Obamacare is projected to cost the government — meaning taxpayers — $2 trillion over the next decade, which isn’t even being factored in here. And how many believe that number isn’t grossly underestimated? Also, Obamacare is going to cause cuts to Medicare Advantage, which will reduce benefits or increase premiums for people by an estimated $35 to $75 per month.

As you can see, Obama is giving you only a fraction of the information you need to understand this picture and imparting the false impression that Obamacare is working now, and when premiums skyrocket next year, he can scapegoat the insurance companies and proceed to his beloved single-payer, full-blown statist scenario. - Human Events

I think the American public will show this fool and the ship of fools that have floated this turd what the real "intended consequences" will look like come November.