The Windy City’s stench of death! 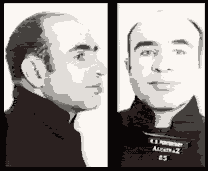 The two things you never discuss – Religion and Politics

Chicago has had a crime problem historically with Al Capone, Rod Blagojevich and Governor Ryan to name a few. The tapestry of violence has always added to the allure of the city as well as the nature of “Chicago Style Politics” that Obama has recently been accused of.


There has been an uptick in political and religious deaths lately that have been ruled suicides and murders.

Christopher Kelly committed suicide on 11/10/09 from an apparent overdose of aspirin. Kelly was just convicted of his role in the Blagojevich “Operation Board Games” investigation that Obama’s name is tied.

Michael Scott, Chicago School Board President, was found dead in the river near his car of an apparent self-inflicted gunshot wound to the head. In addition to the School Board political position, Scott was also on the Chicago Olympic 2016 board along with White House advisor Valerie Jarrett (who is also named in the Blagojevich Obama Senate Seat scandal that is under investigation).

“It appears that Scott had more than a civic minded role that he played in the “failed 2016” Olympic bid. But, Alderman Burke isn’t the only insider benefiting from the Olympics. Real Estate developer Michael Scott also stands to gain. The Chicago Tribune reports of Scott: “A member of Mayor Richard Daley’s team working to bring the Olympics to Chicago has quietly arranged to develop city-owned land near a park that would be transformed for the 2016 Summer Games, potentially positioning himself to cash in if the Games come here.”

Michael Scott is also President of the Chicago Public School board. The Chicago Sun-Times reported that Scott has been subpoenaed to testify before a federal grand jury investigating how students are chosen for admission to some of the city’s most elite public schools.” – Townhall Merideth Jessup 9/29/09

One day later, news comes out that the death is being investigated as possible homicide in spite of the coroners report that it was a suicide.

While researching any other “political suicides” in the windy city I came across this nugget that truly baffles the mind.

It was initially reported by the local media (I-Team) in this fashion:

“'A Chicago pastor was found in his Southwest Side home, stabbed more than twenty times and it was ruled a suicide.


'On Wednesday night, county police were still questioning some people who had dealings with Fr. Waclaw immediately prior to his death and the case remains open. But sources familiar with the investigation say because there was no trail of blood from the messy scene, because the priest was found in a locked bathroom, and because some acquaintances reported his unusual behavior of late. It had to have been a suicide

'The I-Team has been looking into this two-week-old case that has stunned those who knew the priest. The death of Fr. Waclaw [S. Jamroz] didn't receive much attention outside his parish near Midway Airport.”


'A press release from the archdiocese reported that he died of 'self-inflicted injuries.' But after the I-Team learned that those injuries included nearly two-dozen knife wounds, we began investigating a mystery in the rectory.

The article described the I-team investigative team uncovered this about the Pastor:

'The pastor had some personal concerns. He was recently accused of civil racketeering in a lawsuit filed by the husband of a parishioner in a messy divorce.


'According to the suit, Fr. Waclaw raised $577,000 from churchgoers to help the woman pay legal bills. Then the priest testified against an attorney in the case at a state disciplinary hearing-describing 'threats' by the lawyer. Fr. Waclaw said the attorney told him to steal money from the church and when he refused was offered $5,000 cash to forget about it. The lawyer's license was suspended by the state on September 28.

Then there is this nugget:

Interestingly, Father Waclaw Jamroz' stabbing death — ruled a suicide — is similar to that of Catholic choir director (see murder of another Choir director at Obama's church below) and professor Francis E. Pellegrini, who was murdered in 1984. That case, which I covered most recently in a Feb. 7, 2009 column, remains unsolved.


I highly doubt there's any connection between the two cases, considering the Pellegrini homicide occurred 25 years ago. And, of course, Father Jamroz' death, unlike that of Pellegrini, has been ruled a suicide. Still, it's rather eerie that both men died of multiple stab wounds under mysterious circumstances, don't you think?

Here is the news account of the 25 year old unsolved murder:  From a June 1, 1984 story in the Chicago Tribune, by reporter Philip Wattley:

'A suspect was being sought Thursday in connection with the slaying of a City Colleges of Chicago professor whose body, bearing 20 stab wounds, was found in his South Side apartment.

'Police said it appeared that the victim, Francis E. Pellegrini, 47, was slain Wednesday by someone he knew, because there was no sign of forced entry to his apartment....

'Police said the suspect being sought was well acquainted with Pellegrini and recently took out a $100,000 insurance policy on Pellegrini's life....

'For the last nine years, Pellegrini, an assistant professor of sociology and social science for City Colleges, had been assigned to a program that allows high school seniors to take advanced courses to earn college credits, college officials said....

'Pellegrini's body was discovered at about 7:30 p.m. Wednesday by his landlord.

Keeping with the Political and Religion danger angle in Chicago another member of a church was found murdered. The Choir Director of the Trinity United Church of Christ church (Rev. Jeremiah Wrights & Barack Obama’s church) was shot to death in an apparent homicide.

According to a source (Larry Sinclair) who filed an affidavit with the Chicago Police investigating the death of Donald Young, received a phone call from Young, in Texas the just before his death to describe “the intimate relations with Mr. Obama and crack cocain drug use by Obama in 1999.

This murder of Donald Young who attended Obama’s church is addition to another murder where Obama’s name is tied – Lt. Quarles Harris (the Federal witness that was cooperating with the State Department Obama passport file breach case).

Then there is another suicide (September 2007) of Orlando Jones, Chicago political insider who was under investigation on multiple fronts, one of which was related to Stewart Levine and Tony Rezko and Operations Board Games (which Obama’s name is tide to).

It makes you wonder whether it is murder/suicide or both, but one thing is sure -- the Windy City is one dangerous place to be if you are either in Religion or Politics or tied to Obama by name.
Posted by rosey at 11:20 PM