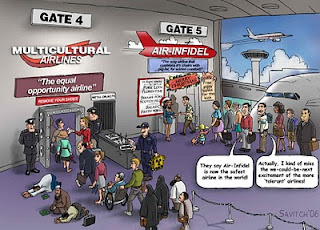 It took them 2 ½ hours to interrupt Obama’s golf game with news!


Welcome to “Infidel Airlines” where the highlight of your flight is being “blown to bits and your corpse strewn over a large swath of US Countryside.”

Janet Napolitano “The system worked” statement about the attempted Christmas day bomb plot aboard NW 253 was as believable as “America is not a Christian Nation” statement made by Obama in his first address to America from Indonesia.

She has since come out with the truth that the system failed miserably. How is it that this woman is still at the reigns of power over our protection after multiple failures? If you will recall the “low level person” in her department that released the “right wing extremist report” to every law enforcement department in the US without her reviewing the document first (yeah, we believed that one). Then, we were treated online (as was every terror wannabe in the world) to the TSA manual on screening methods to find out that once again a couple of low level employees mistakenly posted it on the world wide web (uh-huh, uh-huh, we believe that one also).

After the incident of flight 253 became public, Janet Napolitano issued a press statement (December 27) that “this is an isolated incident and that there is no indication that this is part of a larger plot” (uh-huh, uh-huh).

According to the British Sun newspaper (December 28):

“The 23-year-old Nigerian has told security chiefs of a sinister network in Yemen who are ready and waiting to strike. The reports come after The Sun revealed that cops fear that 25 British-born Muslims are plotting to bomb Western airliners. The fanatics, in five groups, are now training at secret terror camps in Yemen.”

According to ABC news (December 28):

“Umar Farouk Abdulmutallab, charged with the attempted Christmas Day bombing of Northwest Airlines flight 253, told FBI agents there were more just like him in Yemen who would strike soon.

And in a tape released four days before the attempted destruction of the Detroit-bound Northwest plane, the leader of al Qaeda in Yemen boasted of what was planned for Americans, saying, "We are carrying a bomb to hit the enemies of God."

Yemen has become a principal al Qaeda training ground and the accused suicide bomber told the FBI he was trained for more than a month in Yemen, given 80 grams of a high explosive cleverly sewn into his underpants, undetected by standard security screening.”

From the Vancouver Sun:

"We are embarrassed by this incident and we strongly condemn the alleged action by this young man," Lateef Adegbite, secretary general of the Supreme Council for Islamic Affairs in Nigeria, told AFP.

"But it should be seen as an isolated incident”

The Nigerian senate meanwhile "condemned this strange act of terrorism from a Nigerian in strong terms."

"We are at a loss where he got this strange habit from. Nigeria abhors terrorism in all its ramifications . . . We ask the world to treat him on his own merit," senate spokesman Ayogu Eze said in a statement

The dangerously obvious tact that Napolitano is taking with downplaying this terror incident has direct ties to Obama’s intent to close Guantanamo prison. One of the logistical portions of this closure is the transfer of 80 inmates to Yemen. This latest plot highlights the fatal flaw of this proposed transfer.

There are a host of legal and practical problems, particularly concerning those who are deemed "too dangerous" to free. More than a third of the prisoners left are from Yemen and the State Department has still not been able to reach a deal with that country on either security assurances or guarantees that prisoners would be treated humanely.

The Defense Department has now produced an updated version of Return to the Battlefield. According to four separate sources familiar with the study, the rate of recidivism is increasing. One source said there has been a "spike" in the number of former detainees involved in jihad against the United States and its allies. Another called the increase "significant" and "deeply troubling."

But the Obama administration--despite its -self-congratulatory claims of transparency--is refusing to release it. A Pentagon spokesman tells us the latest report is classified and there are no plans to release it.”

The Bush administration released the first recidivism study in June 2008. President Obama has promised to run "the most transparent administration in history." But when it comes to the DIA recidivist study, it is not even as transparent as its predecessor. Many of the recidivists, moreover, are already known--there is no reason that the government should classify those details that can be sourced to newspaper accounts.

In February, for example, the Saudi Kingdom published a list of its 85 most-wanted terrorists. At least 11 of them were once detained at Gitmo. Said al Shihri was held at Guantánamo. He is now the deputy leader of al Qaeda in the Arabian Peninsula, an al Qaeda affiliate that the Obama administration has told us is one of the strongest in the world. Ibrahim Rubaish was held at Gitmo, too. He is now the chief ideologist for al Qaeda in the Arabian Peninsula and is responsible for providing the theological justifications for al Qaeda's terror. Two other members of the Saudi 11 have been killed in shootouts. Every month, it seems, we learn about more Gitmo detainees who have returned to jihad. In June 2008, the DoD reported that 37 former detainees were "confirmed or suspected" of returning to terrorism. On January 13, 2009--seven months later--Pentagon spokesman Geoff Morrell said that number had climbed to 61. In May 2009, when the last report was leaked to the New York Times, the DoD had found that same metric had risen further to 74--exactly double the Pentagon's estimate just 11 months before. At that rate, the Pentagon is identifying on average more than three former Gitmo detainees who are thought to have returned to terrorism each month. If ex-Guantánamo prisoners are rejoining the fight, just as the administration plans to release more of those prisoners, shouldn't the American public know this?”


The Obama administration is responsible for the policies of his Cabinet level people. History has shown that 19 “middle Eastern men” between the ages of 16-23 high jacked 4 airplanes on 9/11 to wage jihad against us. History has shown that airplanes are one of the central focus areas that they continue to employ (Richard Reid). Yet the Administration continues to fail us even after the 9/11 Commission was held and had the answers to the root of the problem as well as the means for future protection. The lack of security that occurred on Christmas was outrageous in its negligence to our protection. The recent disclosure of the TSA “passenger screening” manual on the internet is just one example of this negligence that has not been addressed on the highest level.

Janet Napolitano, John O. Brennan as well as Barack Obama himself should be removed from their positions as they are aiding and abetting terror in the United States against the very citizens they have taken an oath to protect and defend. Has anyone else noticed that Obama has yet to speak to the nation regarding this terror attack? It is the same M.O. that he employed with the Ft. Hood terror attack – silence.
Posted by rosey at 10:11 AM