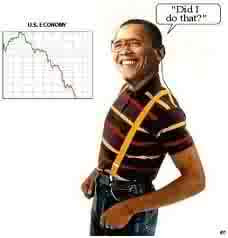 The 2010 Congressional elections will be interesting!

I will just come out and say what is on my mind first then I will give the boring statistical information to follow, that way I will save you a nap. Obama has lost any shred of credibility he may have had to begin with before the election due to his lies, distortions and actions that are harming this country. As a result, when the massive tea party participants as well as the 8+ million Americans that have sent Congressional leaders their “pink slips” (at a personal cost of $29.95 to FedEx) flock to the voting booths to throw out the incumbent bums in 2010 Obama will be an ineffective and unwanted stumping voice in the run-up to the election. He and his teleprompter will be toxic to them. Here goes the boring stuff, proceed at your own peril.


In July 2008 polling data showed Congressional Approval ratings at a historic low of 14%.

These numbers were recorded during a Democrat majority with Bush in the White House and are sure to prove to a problem for Democrats as Congress historically takes the brunt of voter dissatisfaction as economic conditions worsen.

The stock market is up, but it is a deceptive indicator to hang your hats on and here is why! Despite Obama’s stimulus “shovel ready job promises” the WSJ has reported that the nation’s main highway contractors are out of jobs without much on the horizon. Couple this with a stagnant job market that is still shedding vs. hiring the economic outlook is bleak, despite a Union and Education heavy vs. business community light “Obama Job Summit”.

Finally, when the retail sectors report their life saving “Christmas” sales as dismal the “perfect storm” of discontent will turn against anyone with a title of Congressman or Senator before their names in 2010.

The Obama TARP slush fund has been exposed in the “Healthcare Bill” house vote when Mary Landreau received $300 million for her critical vote. That is just a mere drop in the bucket compared to the hundreds of billions that is still available for Senate vote buying money. Eyes will be glued to the Senate debates and text of a Bill that will ultimately be approved as a result. We will see the extent that the White House will dole out to key Senate Democrats to secure a bill that is vital to Obama’s credibility (his Waterloo).

When Obama provided the surge in Afghanistan he pissed off his base, regardless of the cover Senator Kerry tried to provide with his Bush bashing flip flop version of the Tora Bora Bin Laden escape he leaked to the press one day before Obama’s announcement. The economic and troubling foreign and domestic policies that have come out of this non-exclusive, secretive and job killing Administration has resulted in the Independents running away faster than Jackie Joyner Kersey and then there are those anti-Democrat/Socialist Republicans that have not cooperated on iota on anything but the confirmation of Sotomayor.

Nope, nada, zip is what Obama will be able to provide incumbents that have risked everything they achieved in the way of personal political power. If Obama manages to find anyone that wants to have him endorse them on the campaign trail then it will only go to prove they are both devoid of reality, at least ours.
Posted by rosey at 8:33 AM