Remember the “Minutemen” of Arizona? 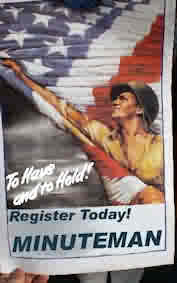 ACLU, MSM and Politicians branded them as white, racist “vigilantes”


I know that you know the leftist politicians, community organizing groups of the left and the groups that align themselves with the socialist agenda have brandished that “race” card each and every time when the populist anger is in direct opposition to their agenda. They are the “little boy that cried wolf” and in spite of the overuse of this ploy, it has been openly rejected (remember we did elect an African American as president) yet they still use it to try to lather crowds into their fold.  Since the Minutemen's inception in 2004 and despite the onslaught of racist charges being hurled at them as well as the Federal Government (all the way up to a Republican President Bush) not once has any of those incendiary accusations panned out.

In an article posted at “Warriors for Truth”, the documented war against those who want our borders protected reared its head from the normal leftist side of the spectrum. The ACLU, in response to the “grassroots” movement that was first to rise in the wake of the Federal Governments failure to protect our southern border, mobilized their army of litigators to follow the Minutemen with cameras and steno pads at the ready to document what they said would be the inevitability of this racist group – violence and the trampling of constitutional rights of illegals?

According to the article, the ACLU Arizona spokesman (Ray Ybarra) insisted that “the mere presence of the Minutemen at the border constitutes “unlawful imprisonment” of illegal aliens.”

The ACLU representative acting in normal intimidation mode warned that the Minutemen could come to our state as “vigilantes” and leave as “defendants” as they have their attorneys at the ready to file civil lawsuits.

The ACLU sent their army down to Arizona in 2004 using this “tired retread of racism” as their rally cry with the intent of intimidating the racist back to their barko-loungers by showing the world that “a bunch of angry white men with guns” were acting dangerously. Guess what happened, nothing, nada, and zilch? The ACLU could not document a single instance of vigilantism against this rag-tag group of racists.

The first thing that we heard in the MSM and leftist “echo chambers” when Arizona Governor Jan Brewer signed the new “illegal immigrant legislation into law” was the calls of racism and racial profiling and anti-Hispanic rhetoric. We saw the “refried bean swastika” smeared onto the windows. We saw rioters, not protestors hurling water bottles at police presence. We even saw the sign that said AZ puts the AZ in nAZi!

The minuteman project was founded in 2004 as a monumental push from the politicians in Washington, DC to formulate another “amnesty” program (from a Republican Administration and Republican controlled Congress). The people, rose up in vocal opposition to the Republican effort in the first massive grass root movement that I believe was the pre-curser to the tea parties. The Amnesty bill at the time was co-sponsored by John McCain (R-AZ) and Ted Kennedy (D-MA). President Bush was supportive of the measure, but, the American populace was not.

In a follow-up to the Minuteman movement and the racists and Federal Government push back (remember it was George Bush who first coined them as “vigilante” in March 2004).

Arizona was again in the sights of the Feds and the lefty organizations with their tired “racial” rhetoric when Sheriff Joe Arpaio began to enforce the law. There was a new Sheriff in town and he dubbed himself “America’s toughest Sheriff”.

“Sheriff Arpaio has spent the last two years testing different methods of cracking down on illegal immigration and his deputies and volunteers have detained more than 1,000 illegal immigrants, a good number of which were stopped for minor infractions and then asked about their immigration status.

This has critics accusing him and his officers of racial profiling.

Despite that, state legislators this month moved toward passing a law requiring all local police departments to start fighting illegal immigration.

An article in the “Huffington Post” titled “Trust in Government Poll” shows that 80% of the country does not trust the US Government. Let’s look at one of the reasons:

"The government's been lying to people for years. Politicians make promises to get elected, and when they get elected, they don't follow through," says Cindy Wanto, 57, a registered Democrat from Nemacolin, Pa., who joined several thousand for a rally in Washington on April 15 – the tax filing deadline. "There's too much government in my business. It was a problem before Obama, but he's certainly not helping fix it."

Republicans in 2004 were pushing for Amnesty. The backlash of the American public against it was profound, so profound that the message from the people to Washington was clear. No Amnesty or “immigration reform” until those in Government who’s constitutional duties are clear (protect its citizens) and address the porous borders and erect barriers first. The Amnesty bill was dropped, due to the outcry and in 2006 the Legislature passed the “Secure Fence Act”. Many in the country believed and rightly so, that this was just more “smoke and mirrors” and that the Feds have no intention on following their own new laws.

In early 2010, Obama scrapped the fence.

In 2010 this is apparent as only 5% of the fence has been built. In fact, one of the first things the Obama Administration has done is to “scrap the fence”. The other thing his administration has done, within months of taking office, was to sic the DOJ on to Sheriff Arpaio for his “reign of terror and civil rights abuses”.

“The DOJ informed Sheriff Arpaio, who touts himself as “America’s toughest Sheriff”, that he will be investigated in a letter delivered to the Maricopa County Sheriff's Office yesterday. Under a banner reading "Americans United to Defend Civil Rights," the leaders presented over 38,000 petition signatures that have been gathered to date in support of the investigation. Signatures were gathered by many organizations including: Sojourners, MomsRising, ACORN, United Farm Workers and America's Voice.”


Let’s take a look at the “organizations” that submitted the petition to DOJ:

Please keep in mind that the DOJ/Obama Administration finds it important enough to act on a 38,000 signature petition but ignores every day American tea party concerns.

ACORN, AFL-CIO, AFSCME, MoveOn.Org, NOW, Planned Parenthood, SEIU and every other leftist community organization under the sun. In fact, you can view the list here and see what the supporting affiliates view is on “changing America into a socialist progressive country”, or as Glen Beck puts it “The Social Justice crowd”.

“Sojourners ministries grew out of the Sojourners Community, located in Southern Columbia Heights, an inner-city neighborhood in Washington, D.C. The community began at Trinity Evangelical Divinity School in Deerfield, Illinois, in the early 1970s when a handful of students began meeting to discuss the relationship between their faith and political issues, particularly the Vietnam War. In 1971, the group decided to create a publication that would express their convictions and test whether other people of faith had similar beliefs. What emerged was a publication committed to social justice and peace: The Post-American.”

The single most important person we must focus on in this organization is Barrack Obama’s new “spiritual advisor” Jim Wallis. Jim Wallis is the found of Sojourners!

“Who is Jim Wallis? According to the New York Times, Wallis “leans left on some issues” but overall is a “centrist, social justice” kind of guy. But a closer look at Wallis’s background reveals him to be nearly as radical, if better at disguising the fact, as Jeremiah Wright.

As a teenager in the 1960s, Wallis joined the civil rights movement and the anti-Vietnam War movement. His participation in peace protests nearly resulted in his expulsion from the Trinity Evangelical Divinity School in Illinois, a Christian seminary where he was then enrolled. While at Trinity, Wallis founded an anti-capitalism magazine called the Post-American, which identified wealth redistribution and government-managed economies as the keys to achieving “social justice”—a term that, as educator/journalist Barry Loberfeld has pointed out, is essentially “code for communism.”

In 1971, the 23-year-old Wallis and his Post-American colleagues changed the name of their publication to Sojourners, and in the mid-1970s they moved their base of operation from Chicago to Washington, DC, where Wallis has served as Sojourners’ editor (and leader of the eponymous organization) ever since.

Advocating America’s transformation into a socialist nation, Sojourners’ “statement of faith” exhorted people to “refuse to accept [capitalist] structures and assumptions that normalize poverty and segregate the world by class.” According to Sojourners, “gospel faith transforms our economics, gives us the power to share our bread and resources, welcomes all to the table of God’s provision, and provides a vision for social revolution.”

Finally, Democrats are now insisting that the new “immigration reform” bill that will be coming soon, must include border security first before Amnesty. Where have we heard that before and more importantly, do you trust it?

Those goals "must be met before action can be taken to adjust the status of people already in the United States illegally," according to a copy of the draft legislation, obtained Wednesday by The Associated Press, that Sens. Harry Reid of Nevada, Charles Schumer of New York and Robert Menendez are developing.

The benchmarks include additional Border Patrol officers and Immigration and Customs Enforcement agents to combat smuggling; more ICE inspectors at work sites; an increased number of ICE officers assigned to detect fraudulent documents, and better ways to determine fakes; more personnel to check for contraband at ports of entry; additional resources to prosecute drug and human smugglers and illegal border crossers, and for deportations.

An outline of the proposal does not specify the additional agents or resources required to meet the benchmarks. It does suggest a two-phase system for legalizing people who are in the U.S. illegally.”

The bottom line is this, the Minutemen; Sheriff Arpaio and now Jan Brewer have been labeled “racist and inciting violence” in their personal duties to do what the Federal Government has failed to do (protect their citizens). There have absolutely zero incidents of racial profiling in any of these organization under attack or any constitutional rights being trampled on since their inception in the early to mid 2000’s. Instead, we have seen our Federal Government personally attack individuals for their efforts instead of protecting us from the consequences of their inactions…..
Posted by rosey at 7:47 PM