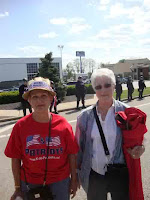 The fabricated town hall event that Obama just held in Quincy where, on camera, a audience member is clearly shown wearing his "community organizer" shirt, prompted Obama to have local police "ring" the convention center with S.W.A.T. teams for his protection against any violence.

I must point out again that every instance of violence that has occurred at tea party protests were carried out by Obama supporters who phyiscally assaulted the peaceful anti-Obama protesters.  The picture shown here is a cliche as "a picture is worth a thousand words".  If this world was right and not upside down in reality, those S.W.A.T. team members should have been facing in the opposite direction and protecting the protesters from Obama supporters!

My, don't these racist, white supremist-like agitators look dangerous?  Those S.W.A.T. team members must have been nervous standing there in the presence of such imminent danger!
Posted by rosey at 7:39 AM