The unhinged left tells us that Grandma is a violent racist!

Yet, the tea party is a peaceful non-violent, grassroots movement!

Do you recall the powerful image during the Tiananmen Square crackdown where a lone man stood in the path of a column of Chinese tanks? This is what it feels like to be a tea party protestor today. The individual represents us and our non-violent civil discourse and the tanks represent the US Government aggressive growth barreling towards us on a menacing and dangerous path.


The left doesn’t quite know how to react to a movement taken out of their playbook of the 1960’s and that of ACORN with one big exception – zero violence attributed to it.

August 2009 – Obama declares his intention to counter tea party town hall protests by declaring “If you get hit, we punch back twice as hard”! Of course Obama was referring to the disruptions of his propaganda message at the town halls and not inciting a call to violence. The statement, the words chosen to cite though are full of violent imagery that can have an effect towards violence in the mind of the unhinged.

On August 10th, directly after the Obama Administration declared it would “punch back twice as hard” Kenneth Gladney, a tea party participant was innocently selling flags when he was beaten brutally by SIEU thugs in purple shirts who were “using the persuasion of power”. Through out the beating (which was black on black) the SIEU thugs spewed black racial epithets against him.

It is important to remember that some of the most violent attacks against tea party protesters have come at the hands of the thugs in the SIEU which is closely and intimately tied to the Obama Administration and Andy Stern (the man who has visited the White House more than any other). It was Stern who boldly proclaimed that “If we can’t use the power of persuasion then we will use the persuasion of power”:

The following day, after the dust settled and the background of the man arrested Huffington Post printed an “Update” – “UPDATE: Newsradio 850 in Denver reports that alleged Colorado Democratic Party headquarters vandal Maurice Schwenkler had done work for Democrats in the past. Schwenkler was paid $500 last November to knock on doors for the Colorado Citizens Coalition, a 527 that supported mostly Democratic candidates in Colorado. The Denver Post also reports that Schwenkler was charged with misdemeanor unlawful assembly on the final day of the 2008 Republican National Convention in St. Paul, Minnesota. Upon hearing this, Democratic Party Chairwoman Pat Waak backed off of a statement made yesterday that the vandalism was part of "an effort on the other side to stir up hate." In a statement to the Denver Post on Tuesday, Waak clarified: "What I've been saying is there is a lot of rhetoric out there from both sides of the spectrum."


So the Democrats blamed the Republicans for the act, then when it is found that it was “one of their own” they could not resist continuing the charade by blaming rhetoric of Tea Party Protestors anyway.

September 2009 - In a knee jerk response we were shown a tearful and weeping Speaker of the House who lamented that she has seen this type of violent rhetoric (from the tea parties) in San Francisco in the 1970’s.

Problem with Pelosi and her alligator tears and fears about tea party violence is the violence she reminisces about was perpetrated by Gay activists on the left against the city of San Francisco, violence that culminated with the murder of the openly gay Mayor of San Francisco (Harvey Milk) by a disgruntled leftist politician.


Since the inception and growth of this coalition of Democrats, Republicans, Independents, Black, White, Hispanic, Atheists, God Fearing, Elderly, Young, Men, Women and all stripes I cannot begin to list not one incident of violence has been attributed to this grassroots movement. Zero, Zip, Nada!

On the other hand there have been many documented incidents of violence perpetrated against tea party members by the left, mostly Union affiliated members. 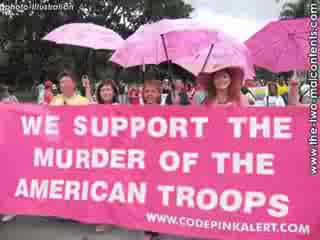 In 2010 she attempted to enact a citizens arrest of Chaney by handcuffing him at a "book signing" and was arrested.

February 2010 – Once again SIEU uses their “persuasion of power” when a woman union member attacked a “union supporter”, that right, one of their own, in a hospital cafeteria.

March 2010 – “65y/o anti-Obamacare protester had his finger bitten off by a MoveOn.org supporter in California”

Finally, Bill Clinton just had to chime in with his absurd attempt to tie the tea party movement to the Oklahoma City Bombing in 1994. Yes, there were a lot of angry “right wing extremists” that were agitating dissent in those day, but you have to remember that McVey was angry at the Clinton Administrations unlawful use of military assets from Ft. Hood that Janet Reno and then future Democrat presidential hopeful, General Wesley Clark to attack the Branch Dravidian compound in Waco, Texas and the use of force in the Ruby Ridge siege.


It is easy for Clinton to tie grandma to Timothy McVey because it was 1994 that the Democrats were swept out of power in the House of Representatives by the Conservatives and their “Contract with America”. Clinton sees history repeating itself here and instead of the “Christian right” rising up to throw the bums out, it is a bi-partisan diverse group of Americans.

The thing to remember here is that no matter how much the left and their media lackeys try to paint this movement into oblivion by deflecting and distorting the things they are known for - back onto grandma we are all like the “tank man of Tiananmen Square” passively and actively protesting the might and inertia of an oppressive government aiming at silencing our dissent with the persuasion of power.

The level of commitment that the radical leftist exhibit to fighting against America’s freedom and exceptionalism can be highlighted by the Census worker that was found hanged and was blamed on anti-Obama protesters but was later found to have committed suicide in a staged attempt to get that message across. Killing oneself for the cause is no different that Islamic jihadists seeking their 21 virgins.
Posted by rosey at 11:16 PM