While Kenya argues for States rights, Obama dismantles ours! 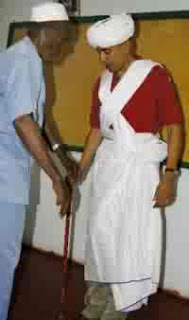 Twisted logic and a modicum of truth!

In March 2010 the Kenyan Parliament was in session discussing the matters of the law of the State. One of the matters brought into the minutes, according to the “Official Report of the National Assembly” was a term we take for granted but the Kenyans are eager to adopt – Devolution.


The reason we take this for granted is because we were successful in our attempt of ‘Devolution” when we adopted and ratified the US Constitution, Bill of Rights and the Declaration of Independence.

The term “Devolution” as is applied for the purpose of this article is on the Kenyan agenda due to decades of their political central party ruling elites, many that can be actually termed as dictatorships and the ensuing corruption that plagued Kenya and most of Africa since the British left.

Though most of the continent has a political “parliamentary system” left over from the British, the centralization of most of the leadership throughout the continent is a quasi-socialist structure which has led to most of the “man-made” disasters of that has plagued Africa. It is exactly this corruption and the enrichment of those in power over the needs of the populace that has forced the Kenyan Assembly to look to the US for its model to transfer the power of the “central state” to the districts, states and provinces to better serve its people through freedom.

The other thing that stands out in this Official Report is found in the second paragraph on page 31 to further this appeal for American style political structure through Kenyan devolution. Look closely at the argument that the “Minister of Lands (Mr. Orengo) makes and I quote directly from the record:

(Please note that I have bolded the portion I referenced above to include the entire argument the Minister has made.)

“Mr. Deputy Speaker, Sir, if we are creating regions or counties on the basis of ethnicity, you have missed the point about devolution. If we want to live in ethnic cocoons, devolution will not resolve our problems. Even a Member of Parliament said yesterday that Kenya is still a tribal country even as we say that we are a unitary State.

Devolution is giving the promises of better governance because you are taking the administration, accountability and resources to the people.

If you look at Nairobi today, the Maasai or Kikuyus can claim Nairobi today, but times have changed. Nairobi now is a metropolitan City. In another ten years, Mandera also will be a metropolitan city. So, the way to look at devolution is about governance. If at all we take this Constitution without looking at the elements of devolution properly, then I am afraid we have missed the boat. We should be very courageous and brave because in 1963, resources were going to the regions. It was not by changing the Constitution that the regions went but by starving the regions of funds and even the power to tax the regions. That is how the regions were killed. But when the regions were working, even hon. Ngala was feeling better and safer as the president of the Coast region rather than being a Member of Parliament here.

The other thing that we are addressing through devolution is exclusion. What has made us suffer as a nation is exclusion. Once people feel excluded, even when you want to employ a policeman or constable or you want to build a dispensary, it must come from the centre. In the colonial days, these things were being done on the ground and they could give bursaries and build roads. I commend devolution. Those who fear devolution are living in the past.

They are being guided by their ethnic consideration and objectives. They are living in the past.

“If America was living in a situation where they feared ethnicity and did not see itself as a multiparty state or nation, how could a young man born here in Kenya, who is not even a native American, become the President of America? It is because they did away with exclusion.”

What has killed us here is exclusion; that once Mr. Orengo is President, I know of no other place than Ugenya. That is why we were fighting against these many Presidencies in the past. I hope that Kenya will come of age. This country must come of age. People want freedom and nations want liberation, but countries want independence."

There you have it, on official record of the Kenyan Government, in the “Minister of Lands” testimony that Obama was born in Kenya and that he is not even a Native American.

What I find most ironic is not the revelation, again, coming from Kenya that Obama is one of their own, but that they point to him as the example to succeed in their attempt to institute constitutional guarantees in forming States rights over their federal structure of centralized power. It is exactly the goal of Obama here in America to perform his own version of “reversed devolution” to take States rights away in favor of an all powerful federal structure here. This in spite of our own Constitution…….
Posted by rosey at 8:16 PM