Want to know why Government run Healthcare is sick? 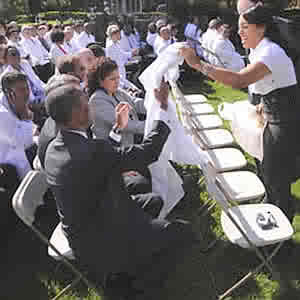 Just wait for the Blagojevich trial to see!


Photo showing "photo-op" at the Whitehouse.  Handing out white lab coats to physicians in attendance.
How many times do we hear the words “it’s for the kids” or “we need to do it for the kids” coming from a Democrat politician when trying to coerce a bill or policy down our collective throats?

Now that “Obamacare” is law and the Federal Government is poised to make all the vital decisions about everything related to the healthcare system that every American, including the kids, rely upon for quality care there seems to be anger and distrust of politicians pulling those strings.

Obama and the Democrats are incredulously saying that they are astounded by the anger and uprising against this law and believe that we should be thanking them for saving us from those evil doers in the Insurance industry. They think that we are ill-informed and downright ignorant about the subject matter and their arrogance is on display front and center over the matter.

A lot of the anger and distrust directly stems from the “credibility” factor of the Obama and Democrats over the secretive and dishonest way they have handled the bill through lies, distortions, bribes and corruption of the entire process. The complete partisan tactics on the Democrats part were disgusting. The behavior of the Democrats is childlike. It looked like tantrums on a school recess playground where the bullies stole the ball in order to directly affect the outcome of the game. Time after time they were caught in lies and distortions and changed their stories to fit their reality. They complained that Republicans did not have any viable ideas that countered their efforts while at the same time they locked out opposition lawmakers from discussions on the bill. In fact, they went as far as “changing the locks when the act of locking an existing meeting room failed to keep them out”. Yes, childlike indeed!

One of the tactics that the Democrats were caught in was the bribes to the AMA over Medicare reimbursement allotments to physicians while increasing Medicaid rates paid to physicians for care (aka - “Doctor Fix”).

We know that Obama and a great number of his “inner circle” hail from the “Chicago political machine”. The tactics of corruption of this particular political machine is well known in certain circles but will come into full view in the coming months when Rod Blagojevich goes on trial. One of the numerous charges against him is the attempted extortion of “Childrens Hospital” CEO to contribute to the “Friends of Blagojevich” re-election campaign fund in exchange for $8 million in direct Medicaid reimbursements to the doctors at the Hospital.

Once again, remember the Democrats favorite fallback position of “do it for the kids”!

Once again, remember that Obama and the Democrats want complete control of the Healthcare infrastructure. The Blagojevich trial will spotlight just how they use it for their own political and personal piggybanks.

In recent court filings, the ex-Governor’s brother is seeking to separate himself from the trial, where he is a co-defendant, because he is fearful he will get “sucked down the drain” with his brother. This is at the same time the ex-governor is proclaiming his innocence of the “trumped up charges”.

Here is a description of the conversations surrounding the event that were caught on FBI tape and reported by the Chicago Tribune on April 14:

Lobbyist A understood Blagojevich to be making a reference to the efforts of Children’s Memorial to increase the pay for its physicians and to be saying that Blagojevich wanted to approach Children’s CEO for a $50,000 contribution to FOB.

In response, Lobbyist A said that Children’s Memorial was a non-profit organization, $50,000 was a very hard number, and now was not the time.

Lobbyist A thought that it would be appropriate to wait for a year or more to solicit any contribution, and that it would be wrong to ask Children’s Memorial for money while they were awaiting funding for their doctors. Lobbyist A suggested giving Children’s CEO more time before soliciting any donation.

In response, Blagojevich said words to the effect, “how much time do you mean, ten days?”

Either later that day after Lobbyist A left or at another meeting between Blagojevich, Robert Blagojevich, and Monk, the topic of getting a contribution from Children’s Memorial was raised again.

Blagojevich asked Monk to seek a contribution from Children’s Memorial.

Monk said that it did not make any sense for him to do that because he did not have any contacts at the hospital, and eventually it was decided that Robert Blagojevich would follow up.

On October 9, 2008, Robert Blagojevich left a voicemail for Lobbyist A in which Robert Blagojevich indicated that he was “just kind of trying to clean up ah, loose ends from yesterday” and that “I know that you’re gonna be following up with Children’s Memorial and just wanted to know what the next steps are and what it is, kind of we’re looking to accomplish there.”

Robert Blagojevich indicated that he wanted to “ make sure I’m following up on you so you get it done.” and that “you know I’m jerking your chain but ah, I ah, I think they have a potential to do well by us.”

On or about October 17, 2008, Children’s CEO called Blagojevich after receiving a message that Blagojevich wanted to speak with him.

In that conversation, Blagojevich said he was supportive and that he had approved a $10 million increase in the Medicaid payments that would be made to pediatric doctors.

Lobbyist A understood that Blagojevich was, in effect saying that Children’s Memorial had gotten the money they wanted and, therefore, were going to be asked to make a contribution to [the Friends of Blagojevich]

Robert Blagojevich agreed to make the call to Children’s CEO to ask for the money.

Robert Blagojevich said words to the effect that “we would like for you to raise $25,000 for the governor.”

Robert Blagojevich was not specific about how Children’s CEO could arrange to raise the money, but suggested that Children’s CEO, his friends and associates, and Children’s Memorial board members could make contributions.

Children’s CEO had no intention of raising funds for Blagojevich, but was afraid that if he said no directly Blagojevich might rescind his commitment to increase the pediatric Medicaid rates.

Robert Blagojevich pressed Children’s CEO on arranging the contribution, saying that a contribution would be most helpful if it were delivered by the end of the year.

Children’s CEO was upset after the call because of the pressure from Robert Blagojevich to arrange a contribution of $25,000 to Blagojevich.

Robert Blagojevich made several more attempts to call Children’s CEO after October 22, 2008, but Children’s CEO did not answer or return those calls.

Deputy Governor A was not expecting the reimbursement issue to come up in this conversation.

Deputy Governor A responded that it was set for January 1st.

Blagojevich then asked Deputy Governor A if they could “pull it back if we needed to — budgetary concerns — right?”

Deputy Governor A told Blagojevich that they could pull it back.

Blagojevich stated that was “good to know.”

Further, Deputy Governor A had not talked to Blagojevich about the rate increase being a budget problem and, in fact, the proposed rate increases would not affect the budget because they were not to be paid for with new money.

Deputy Governor A understood that if he let the rate increase go through, Blagojevich would have been very angry.


Robert Blagojevich said the contact at Children’s Memorial had not returned a number of his calls and he was not going to call him anymore.


Blagojevich got upset and said words to the effect, “Screw these guys” or “Screw them.” Almost immediately, Blagojevich arranged for a phone call to Deputy Governor A about some funding that the State of Illinois was about to give to Children’s Memorial. While Monk did not participate in the phone conversation or hear Deputy Governor A’s statements, he heard Blagojevich said words to the effect, “Where are we on the money to Children’s Memorial Hospital?”


There was a pause, then Blagojevich said words to the effect, “Hold it up” or “Slow it down” or “Don’t do anything until I tell you.”


Monk understood that Blagojevich was instructing Deputy Governor A to hold up the money that was supposed to go to Children’s Memorial.

As of the date of Blagojevich’s arrest on December 9, 2008, he had not directed that any work on the Medicaid rate increase resume or go forward, and no further work had been done.

As you can see, the “Chicago Political Machine” has the Children best interest at heart. So much so that if the Childrens Hospital did not play ball their funding was cut.

According to the article at Politico (Andy Barr) – “In the end, he did it for the children. And the vulnerable senior citizens.


That was former Gov. Rod Blagojevich's (D-Ill.) defense Thursday as he insisted the Illinois state Senate wanted to remove him from office because he provided health care for low-income families, lowered the price of prescription drugs for seniors and protected the lives of infants. And, he asserted, if that was an impeachable offense, then many other prominent politicians ought to be impeached as well.


The state Senate voted him out of office anyway, by a unanimous vote.


In his final address as the governor of Illinois, rather than defending himself against the allegations that he tried to sell President Barack Obama’s Senate seat, Blagojevich launched into an indictment of his state’s lawmakers who he said were intent on impeaching him as political retribution for health care spending.


At another point, Blagojevich asked “how can you throw a governor out of office who was acting to protect the lives of senior citizens and infants and trying to find ways to be able to help families?”

So we Americans must repeal this power grab of the massive funds available to the corrupt and secretive socialists who want this money as their personal and political piggybank. Most of all we MUST DO IT FOR THE CHILDREN!
Posted by rosey at 7:56 AM