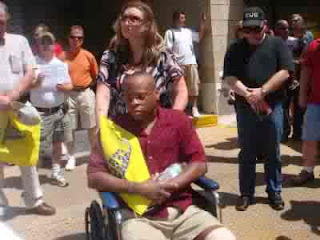 After conviction, Gladney should pursue a multi-million dollar lawsuit


A hefty civil suit should follow a verdict in the criminal trial. Gladney should go “Goldman” on SEIU and force the Union to endure a lengthy civil rights violation trial directed at Obama (for his “if we get punched, punch back twice as hard” position) and also Andy Stern (for his “we will use the power of persuasion and if that doesn’t work then we will use the persuasion of power” position).

I also wonder where Jesse Jackson, Al Sharpton and the NAACP is? Oh, that’s right, Gladney doesn’t fit the mold of how a black man should be acting. They believe he should have been on welfare and protesting in front of Bank of America with the ACORN crowd and not that “All White, racist right wing crowd”. Oh, yeah I forgot, isn’t he black?
Posted by rosey at 3:39 PM