Bringing a gun to a knife fight! 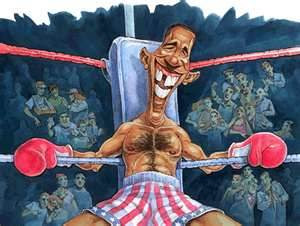 There was an article over at "American Thinker" today that brings a very good point for Team Romney to consider when getting into the ring again for the final debate.  Continuing with the boxing analogy here, Obama is already in his corner having his wounds closed and his trainers are yelling at him that he is losing and needs to come out in the final round and go for the knock-out to win.  He cannot win on points at this point, it has to be a knock-out.  Team Obama has already thrown everything at Romney, including the bus reserved for Hillary Clinton (Benghazi).

Now that you have that visual in mind and know all the facts that paint this picture as "realistic" I have to agree with the author that Romney can deliver the final blow ala "Cinderella man" by going to a subject already used in the past fights that were convincingly effective -- the economy!

Even though the upcoming final debate subject is "foreign policy" the underpinnings of America's foreign policy is our economy, a robust economy!  It is Romney's gun that he will be bringing to Obama's knife fight.

Under Jimmy Carter's feckless policies that are not so dissimilar to Obama's, Iran had taken America hostage until Reagan bloodied Carter in his reelection hopes.  The day Reagan took office Iran released them after 444 days of captivity.  Reagan wasn't stumping about bowing to Iranian, Russian or Saudi rulers to effect his policy vision for America.  No, Reagan was talking about bringing jobs and prosperity to that "shining city" on the hill vision.  Once Iran capitulated, Russia was next.  Did Reagan bow to Russian rulers or capitulate to them as Obama has done?  No.  He strengthened America through prosperity while driving communist Russia to ruin.

All Romney needs to do is point this out, this Obama economy to the viewers the world over and watch the stock market react the day after.  We are within weeks of taking our country back from feckless, clueless and malfeasant Democrats and as the victory party gets under way the Iranians, Venezuelans, Russians, Chinese and most importantly the Al Qaida "dead-enders" will sit up and take notice.  Israel can breath a sigh of release as well as everyday Americans that relief is on the way and that we don't have to settle for less because our man came to a knife fight, armed with a gun.
Posted by rosey at 5:26 PM