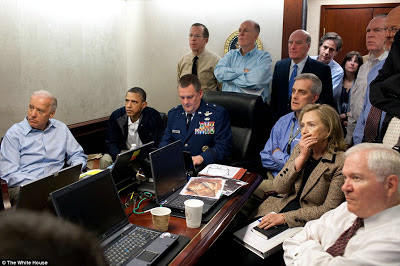 The NSC admits that our intelligence networks had "real-time" intel and video as the terrorist attack was unfolding.

Is it had to imagine that the picture to the left occurred during this "real time' video of our Ambassador being dragged out of the compound.  In fact the photo on the right was purported to be the Administration watching the Bin Laden raid "real time"!

There has been much "conspiracy" theory about this very photo as some believe that "Obama" was airbrushed into the photo given his body size compared to everyone else in the photo.

The current investigation on Capital Hill is trying to determine what and when the Administration knew the truth.  Isn't it ironic that the killing of Bin Laden was Obama's reasoning that "Al Qaida", as an organization, was dead.  The war on terror is over.

"On Sept. 11, scores of men with automatic weapons and RPGs launched a night assault on the U.S. compound in Benghazi, killed Ambassador Chris Stevens and set the building ablaze. Using mortars, they launched a collateral attack on a safe house, killing two more Americans, as other U.S. agents fled to the airport.


On Sept. 14, White House press secretary Jay Carney said the attack came out of a spontaneous protest caused by an anti-Muslim video on YouTube.

On Sept. 16, U.N. Ambassador Susan Rice told the entire nation the attack had not been premeditated or preplanned but emanated from a spontaneous protest of the nasty video.

On Sept. 25, Obama at the United Nations mentioned the video six times."

"If real-time intelligence and U.S. agents at the scene knew it was premeditated, preplanned terrorism by Sept. 12, who told Rice to deny specifically on Sept. 16 that the attack was premeditated or preplanned?


Indeed, why was Rice sent out at all? She is not in the chain of command. Why she accepted the assignment is obvious. She wants to be Hillary Clinton’s successor as secretary of state. But who put her up to this? Who pushed her out front to mislead us?

The CIA’s David Petraeus or Director of National Intelligence James Clapper should have been sent out to say what we knew, five days after the massacre. As Chris Stevens reported to the secretary of state and President Obama, why was Hillary or National Security Adviser Tom Donilon not sent out to explain what had happened to Stevens and the others?

Looking back, Carney and Rice appear to have been used by their superiors.

Carney would never have gone out to speculate on his own about what happened in Benghazi. His line on Sept. 14 had to have been fed to him by the White House chief of staff, Donilon, Obama or all of them.

As for Rice, someone contacted those five TV networks to put her on. And the party line she delivered — the opposite of the truth — had to have been fed to her, almost word for word — by Donilon or the chief of staff.