Never let a crisis get you wasted 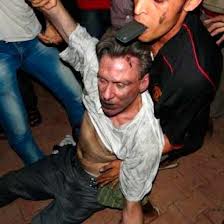 As expected the carefully crafted Administration lie is unravelling a light speed.  The lie itself, to the American public as well as the World, cannot be ignored for what it is.  The inept handling of the whole affair from the begging got the Ambassador killed along with members of his staff.

In crafting this lie, the Adminstration also utilized an American citizen as further fodder (the filmaker) to promote this lie into something that caused more deaths when the anti-islam narrative fanned the flames in the streets of Libya.  While doing so, this Administration also put a chilling effect on free speech when Federal police took this filmaker in custody under the guise that he broke with his probation.

Whether that is the case or not, the appearance that he was taken into custody for other reasons has been floated out there in cyberspace.  If you think for a moment that Obama is headed for a "foreign policy debate" victory, think again.  Bill Clinton can come to Obama's rescue all he wants as Hillary is so tied up in this illegal coverup that he will have to split himself in two defending them all.

The MSM is already advancing the narrative that the investigation is partisan and for political reasons.  But what you have is cast of miscreants that are in charge of our national security and are willing to do nothing in order to advance an "all calm" illusion when the enemies are literally at our gates.....
Posted by rosey at 5:20 AM