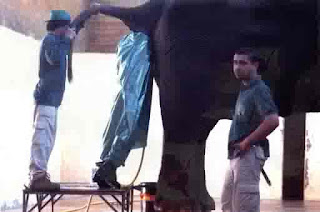 Democratic operatives have been spotted looking to the current Republican Leadership for answers deep inside their camp. When confronted the men denied any wrongdoing and simply proclaimed that "we lost our car keys".
Further reports that one of the men spotted here was rushed to the Emergency Room of a nearby hospital when a hospital spokesman indicated that even though he had his head in the job the operative denied that he inhaled.