The United States of America is INSOLVENT 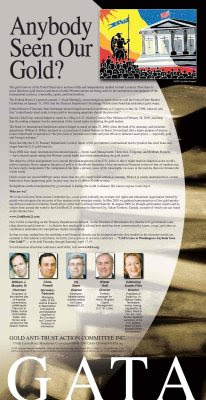 It is time we audit the Federal Reserve for answers

During the Presidential campaign that ended in an usurper stealing the White House (yes a Republican can now claim an Presidential election was stolen) most eyes were focused on McCain and Palin or Obama and Biden but many others were on Ron Paul.

As a Republican who was not thrilled about the Republican ticket of McCain (at least until Sarah Palin joined forces with him) I viewed the candidacy of Ron Paul with suspicion as being too radical. That being said I now believe that I was short sighted on many of the things that Paul had to say that I now see (in hindsight) was right on target.

Recent current events have opened my eyes to those whom, like me, were suspicious and fearful of the policies he had run his “Presidential Platform” on.

One of those issues I refer is his belief that there are those in the US Government that have been hiding the fact (through legislation and laws) that our Government is insolvent! How can we really know for sure what the situation is when laws are in place to prevent the public from scrutinizing the Federal Reserve?

The second issue I see happening (and which I wrote a blog on here) was the Government’s attempt to guide law enforcement agencies by training them to spot “red flags” identifying individuals as potential militia members (right wing radicals).

When I wrote the blog that the Federal Government was training law enforcement against those with Conservative views as potential militia members I did not mention one of the red flags that made it into the report (because I did not see any type of connection or relevance to the two issues I mention above) that included Ron Paul and his followers.

More importantly, the question I failed to ask, or even see, was “why is there such a rush at this time to train law enforcement officials to spot militia” when in the last 20 years there have not been any attributable act’s against our government terror wise by “militia groups” especially in Missouri where the law enforcement memo is being disseminated and taught?

Additionally, there are “homegrown” terror groups that ARE active in the US and have perpetrated over 2,000 acts of terror on US soil over the last 20 years, so why is there no seminars or “red flags” targeting them? The specific group I mention here is the Earth Liberation Front or E.L.F. The ELF has 4 members currently on the FBI’s most wanted list (terrorists) and not one “militia member”.

So what is the rush to train law enforcement against militias? I could go on to say some party hack response is because the group is an environmental one and is looked upon as altruistic by Democrats whereas “militia” groups are Christian and mainly white. I fear that it is much more than that. I believe they are directly targeting Ron Paul to discredit his Federal Reserve Bill introduced into legislation (HR 1207).

I know that this will sounds like “conspiracy theory Friday” but there are signs that are aligning that bear scrutiny. Russia and China and now the UN have called for a new “global currency” that will replace the US Dollar. Why? It is because the US dollar is gone. The fact that the UN and two quasi-communist countries are calling for this should send shivers down anyone who loves and enjoys our freedom. Once we cede our country to foreign currencies is when we cede our other freedoms that the dollar has ensured.

US Treasure and the Federal Reserve need to be audited to clarify our Gold Reserves. There is ample evidence that our own government has spirited our gold out of the Federal Depositories to hide the impending financial crisis:

In congressional testimony, Tim Geithner was asked directly whether or not the Obama administration would cede our dollar to a “global currency” and under testimony he stated “under no circumstances would that occur”.

The very next day Geithner participated in a speaking engagement at “the Council of Foreign Relations” where he told the power brokers that the US is considering it.

Did he lie to Congress or to CFR?

The Federal Government through the Department of Homeland Security and FEMA has mechanisms in place to quell civil unrest in the case of a “Presidential Declared Emergency”. It begs the question, if “martial law” is called for, does the President have the backing of the military to quell public dissent?

This author says no. The military is quite detached from their current commander in chief and do not believe that they (either the National Guard or active duty military) would round up their family members and neighbors by disarming or otherwise if they believed it to be a Democrat power grab. This author also believes that the President and his socialist henchmen understand this to be the case which is why they are calling for the funding of a civilian defense force that is greater than the military.

With a huge grassroots groundswell that the MSM is totally ignoring as un-newsworthy the tea parties against the expansion of government and increasing taxes to pay for this unprecedented spending spree (which is larger than every single Presidential administration combined since George Washington) that the socialists have embarked us on. Think about that, if we take the total deficit spending of every single President has contributed to the national debt over our entire history - it does not even match the amount that, in less than 60 days, this President has spent or projects to spend.

It is time for conservatives to hit the Democrats back in the "community activism" arena (which has already begun with the Tea Parties). We need to take the reigns of government away from the socialists who are hell bent on the destruction of capitalism to replace it with socialism.
Posted by rosey at 12:28 PM