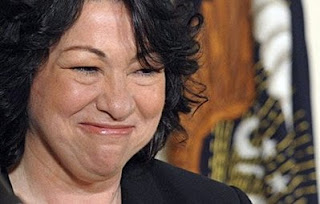 Maybe it’s just me, but are they related by more than idiology???
Hey, it’s OK to label the Supreme Court pick of the Obama Administration a dangerous, nazi with a sexist and racist bent. Ok, the sexist and racist bent is added on because we can call her that because of her 2001 interview where she stated her superiority over men, white men specifically.

What’s more is she mocked the constitution when she bragged that from her perch on the 2nd Court of Appeals bench is where “policy” is made and implemented.

The reason we can say these terrible and divisive terms on another human being that happens to be Latina is because the very same liberal groups that praise this particular nominee went out of their way in 2001 to call another Latino nominee much the same as I listed above. I am only taking their words at their root meaning. Sounds rather harsh doesn’t it, then how can the liberal advocacy groups that now praise this Obama Supreme pick for the fact she is Latina just a few years ago called Estrada a “nazi” and dangerous because of his Latino heritage and is practicing catholic?

Oh, but wait, we can’t say anything like that because the White House spokesman has threatened us on May 27th (on C-SPAN) when Robert Gibbs “warned Sotomayor attackers to be careful!”
http://rawstory.com/rawreplay/?p=3492

The main stream media is awash with headlines describing the Usurper President’s nomination of Sotomayor in “Historic” terms.

Before I get into the praise of the liberal advocacy groups as that deem Obama’s pick as “historic” I feel compelled to remind the readers that these same groups that are now fawning over Sotomayor were the same groups that called Bush’s pick of Estrada “dangerous Latino and being a Nazi.”

Sen. John Cornyn, Texas Republican, said, "Describing Miguel Estrada as 'especially dangerous, because ... he is Latino,' as suggested in these memos, makes my skin crawl."

It is believed that one of the reason for the “Durbin memo’s was because the Democrats believed that it would give Bush points with Hispanic voters. But the memos to Senate Minority Whip Dick Durbin mention liberal interest groups' desire to keep Estrada off the court because his Latino heritage made him "especially dangerous" as a potential future Supreme Court nominee.

The other aim of discrediting Estrada and utilizing the fillibuster against him was to delay putting a body on the bench while an affirmative action case was pending (University of Michigan case regarding the constitutionality of affirmative action in higher education).

According to the Washington Times:

“The memos, apparently written by aides to Sens. Edward M. Kennedy (D-Mass.) and Richard J. Durbin (D-Ill.), sketch the evolution between 2001 and early 2003 of plans to filibuster court nominees perceived as too conservative -- "nazis," in the words of one unidentified Democratic memo writer. At their most pointed, the documents assert that a leading civil rights lawyer urged senators to leave vacancies unfilled on the U.S. Court of Appeals for the 6th Circuit while a particular case was pending.”

“The story sketched by the leaked memos starts in autumn 2001, not long after the terrorist attacks on the World Trade Center and the Pentagon. Staff members, whose names have been blacked out, use the memos to update their senators on the views of leading liberal civil rights groups -- including the Alliance for Justice, People for the American Way, the NAACP, the Leadership Conference on Civil Rights and several abortion rights groups.”

The liberal civil rights groups (or as the Democrats love to say “special interest groups” that buy votes from corrupt politicians) that were behind the tactics the democrats adopted from these memos were schizophrenic as they were attacking one Latina because of her heritage and attacking another Latino because of heritage.

For instance, ALLIANCE FOR JUSTICE (advocacy group behind Durbin memo):
On Sotomayor
May 26, 2009, Washington, DC—We are thrilled with this choice. Sonia Sotomayor will be a strong voice to uphold the Constitution and the law to provide equal justice and protect personal freedoms for everyone in America, regardless of wealth, status, or popularity.
President Obama has nominated a highly qualified candidate with a compelling personal story and outstanding educational credentials. Furthermore, the president is making history by nominating the first Latina to the Supreme Court. Judge Sotomayor has more federal judicial experience than any justice nominated to the Supreme Court in the past 100 years.
Judges make a huge difference in our lives.
Courts protect our air and water, hold corporations accountable, ensure equal opportunity and fair pay, and safeguard our personal freedoms.
This nomination shows that President Obama is appointing judges who understand that the role of the courts is to give everyone a chance to be heard, to stand up for their rights, and get justice.
On Estrada
The filibuster is a legitimate tool for the Senate minority to prevent the administration and its allies in Congress from packing the courts. To be confirmed, a nominee has to have an excellent record in the law, show honesty and integrity, and have a demonstrated commitment to equal justice. The Senate has a responsibility to defeat any nominees falling short of these standards by any means necessary. Filibusters may also be appropriate when the administration or the Senate majority disregard established rules and procedures. As a substantive matter, Pickering and Owen have both already been defeated, if the Senate reconsiders their nominations, they should be defeated again.
Both of these statements came directly from their website. Notice how this liberal group strongly advocates the “filibuster” (which the democrats did for 2 years with Estrada).

NAACP:
On Sotomayor
The nomination of the first Latina to join the Supreme Court is a moment that our nation should celebrate,” Jealous said. “It brings us one step closer to the inclusive democracy that is the hallmark and promise of our great nation. Judge Sotomayor has the judicial track record, the intellectual fortitude, and the life experiences that will serve the Supreme Court and our nation well.”
Said Jealous: “It is our hope that the Senate will not politicize such a crucially important choice, but make its decision expeditiously based on her unimpeachable record as an outstanding prosecutor, litigator, and trial and appellate judge. This is a valuable opportunity to show a reasoned non-partisan dialogue around a decision that brings excellence to our highest Court and will only move our nation forward.”
On Estrada
So far the NAACP has opposed the nominations of Jeffrey Sutton, Miguel Estrada, Priscilla Owen, Carolyn Kuhl, Charles Pickering, Sr., William Pryor, John Roberts, Samuel Alito.

On Sotomayor:
“Today is a monumental day for Latinos. Finally, we see ourselves represented on the highest court in the land,” said Janet Murguía, NCLR President and CEO. “Judge Sotomayor’s story personifies the American Dream for so many Latinos in this country.”
“By nominating someone with the experience, background, and superb legal credentials of Sonia Sotomayor, President Obama has made an excellent choice for the entire country,” added Murguía. “The President wanted a justice who not only is a respected jurist, but also understands how the law affects the lives of everyday people. Judge Sotomayor embodies those qualities.”
“We commend President Obama for making this historic appointment and for recognizing that excellence and diversity are not mutually exclusive,” concluded Murguía.”

“Washington, DC - The National Council of La Raza (NCLR), the nation’s largest Latino civil rights organization, today reiterated that it neither supports nor opposes the nomination of Miguel Estrada to the D.C. Circuit Court of Appeals.”

"ACORN members across the country are inspired by President Obama's historic nomination of Judge Sonia Sotomayor for the pending vacancy on the United States Supreme Court. Judge Sotomayor brings a wealth of not only judicial experience, but experience in the real world as well. As a longtime practitioner of the law as private litigator, public prosecutor, and judge, Sonia Sotomayor has a profound understanding of how the law affects real families in real situations.
"Judge Sotomayor's incredible history of rising to the top of the legal profession from humble roots resonates deeply with ACORN members who work every day to open up opportunities for those in challenging circumstances.
Posted by rosey at 7:35 AM