Something isn’t right in DC, Are the Federal Reserve and Treasury counterfeiting US Bonds? 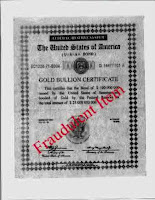 There are a couple of things that have happened in the law enforcement and the Government Financial sectors that are curious.
Last week I posted a thread here:
http://www.headlinezone.com/index.php?showtopic=15127
The pair of Japanese nationals was arrested in Italy attempting to cross into Switzerland with $134.5 Billion dollars in US Bonds (249 issued in $500 million and 10 worth more than $1 Billion face value).
If these US Bonds are real then the 2 Japanese men alone would rank as the fourth largest creditor ahead of the UK ($128 Billion) and behind Russia ($138 Billion).
http://www.bloomberg.com/apps/news?pid=206...id=afJXAA1ahZyo
So, tell me why is it that the largest smuggling case in history gone unreported in the US mainstream media? The story broke here:
http://www.asianews.it/index.php?l=en&...eo=2&size=A
Furthermore, back in March 2009 “The Wall Street Journal” published an article that reported on the balance of the $700 TARP fund account was down to $134.5 Billion dollars (the exact amount of US Bonds these 2 Japanese men were smuggling into Switzerland) and Reuters also ran a story on the TARP fund balance.
http://online.wsj.com/article/SB123828522318566241.htmlhttp://www.reuters.com/article/idUSWEQ00086520090408Is it coincident that the amount of remaining TARP fund balance and the “counterfeit Bonds” seized the same amount? Why has the US and Italian Press silent on the story?
On June 11th and just 3 days after the arrest our Treasury Secretary met with Japans Finance Minster and then on June 16th the Italian PM shows up at the White House. Yet for all the fanfare of the two “high profile meetings” between two countries that have been involved in this arrest there was no mention of the arrest as a topic of discussion or even to hold a press conference to re-assure the country that the SEC, FBI and Italian police are cooperating to get to the bottom of the largest counterfeit bond case in the worlds history?
http://www.reuters.com/article/usDollarRpt...151467420090611
The White House has also been silent?
The Obama Administration is, again, attempting to push through sweeping “financial reform” through the Senate in a rush that would give the Treasury Department unheard of powers that should bring pause to anyone who calls themselves American. With the head of Treasury (Turbo Tax Cheat Geitner) stonewalling any and all efforts to divulge to the public a full accounting of the bailout money (which they are required to do by law and have refused) and TARP funds, the thought of giving them even more power is disturbing.In addition, the “financial overhaul” is coming at a time when Congress now has enough co-signatures on a bill that would, for the first time in the 90+ history of the “Federal Reserve”, force a full disclosure audit of that agency.
Though I have not seen the details of Obama’s sweeping regulatory changes, it will be interesting to see if it has a “blocking” maneuver over the Ron Paul legislation for the audit of the Federal Reserve.
With everything being shoved through Congress by insistence of this socialist Congress, Senate and White House and the amount of money being printed and Bonds equaling UK’s debt investment total and the US dollar on the brink of collapse, it is hard not to think that there are those in our own government that are hastening the fall.
The quality of the forgeries were such that only a Government with the technology and printing presses could produce. The amounts of the Bonds are such a high amount that only Countries have them and that no individuals do. So what country printed these bonds and where were they going when they were apprehended?
Posted by rosey at 8:16 PM