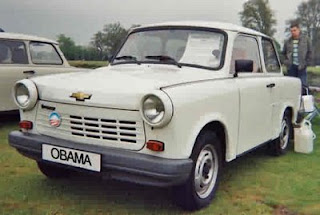 GM (Government Motors) name inappropriate, It should be called "Fannie Motors"
An editorial from NRO about the above title of this thread is an apt description of Obama's adminstration running the new "hopefully leaner and greener" company.
The name Fannie Motors is because the model that is being utilized by those in the Government is the same model of the failed Fannie Mae and Freddie Mac one.
Who ever said if you don't know history your doomed to repeat it. The aim of the governments fixation on running the company is predicated on two goals:
1) to provide health care, benefits, and high-wage employment to the United Auto Workers union, and
2) to build the little green cars that President Obama and the Democrats want them to make, and the American people do not want to buy (at least not from Detroit while Japan makes them better for less).
In exchange, the Big Three will continue to enjoy implicit and explicit taxpayer support.
The article say's it best "As long as the feds are telling Detroit what kind of cars to make, where to make them, and how to compensate their workers, Detroit will require taxpayer assistance, for the simple reason that the feds are terrible at running businesses. And if you believe otherwise, we’ve got a couple of defunct mortgage companies to sell you.
Posted by rosey at 10:14 PM