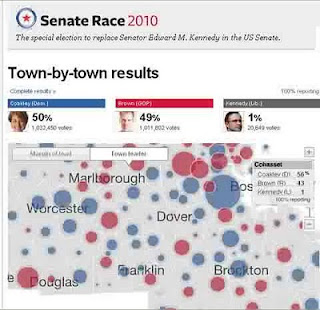 
Voter anger and disgust for Obama’s change but then again I heard that the "Cosmopolitan" nude layout proved to voters that Scott Brown was the most "transparent" politician anyone has seen in a long time.


The finger pointing between Washington DC Democrats and the Martha Coakley campaign began last week in earnest. Barack reluctantly flew into Massachusetts to try to provide the bump Coakley would need to beat Brown knowing full well that it was politically dangerous to his reputation.

The MSM, Democrats and the White House have, for the last year wholly ignored the will of the American people by pushing, pulling and heavy lifting the monstrosity called “health care reform”. In the process the above socialists have thumbed their collective noses at those in opposition by labeling them thugs, extremists, Nazi’s and uneducated yokels that were bought and paid for by the evil insurance lobby.

It was ironic that the Obama Administration as well as Congressional leaders, behind a cloak of secrecy bribed the same industry that they labeled evil doers. The American public did not buy for a moment the belief that those who were pulling America over the cliff were ignorant of their anger yet time after time our elected Democratic leaders were telling us that we wanted this horse crap of a bill. Tea party protesters did not exist in the numbers actually attended and that these same leaders, for the last 10 months have received over 9.5 million pink slips from constituents who doled out $29.99 of their hard earned money to deliver these individual pronouncements of anger.

Even after the elections in New Jersey and Virginia they were telling us to sit down and shut up because they knew better than us.

Well, after Brown’s victory tonight Democrats are running to the camera’s to denounce the timing of Health care. How stupid do they think we are? They pushed this crap in the face of great defiance at great personal peril and now they are sensible, give me a break.

One of the first to rush to the camera’s was the Senator from Virginia (guess he got the message huh) and said this:

“Senator Jim Webb puts out a statement that puts the notion of a quick Senate vote out of reach and pretty much makes a certification fight moot:

In many ways the campaign in Massachusetts became a referendum not only on health care reform but also on the openness and integrity of our government process. It is vital that we restore the respect of the American people in our system of government and in our leaders. To that end, I believe it would only be fair and prudent that we suspend further votes on health care legislation until Senator-elect Brown is seated.

And good luck getting Lieberman to vote for cloture this week anyway.” - Politico

In fact, early signs of split emerged as the polls closed in Massachusetts – between leaders like Majority Leader Steny Hoyer who said “the Senate bill is better than nothing,” and individual members who didn’t want to swallow the Senate’s version of health reform whole.

"The only way to go forward is to take a step back. If there isn't any recognition that we got the message and we are trying to recalibrate and do things differently, we are not only going to risk looking ignorant but arrogant,” said Rep. Anthony Weiner (D-N.Y.), one of the leading advocates for health reform in the House.

"I don't think it would be the worst thing to take a step back and say we are going to pivot to do a jobs thing" and include elements of health care reform in it, he said.

"If it comes down to that Senate bill or nothing, I think we are going to end with nothing because I don't hear a lot of support on our side for that bill,” said Rep. Stephen Lynch (D-Mass.)

So, there we have it – more proof that Americans (even liberal Massachusetts ones) are rejecting the Democrats platform and bankrupt socialist values. This is just the third election, still more to go.
Posted by rosey at 8:24 PM