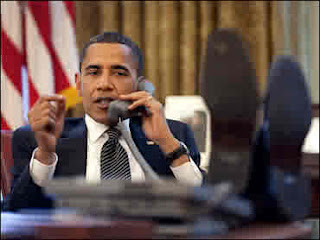 
The Washington Times had a great editorial on Obama’s freshman year in office that “ticked off” a list of his, er, accomplishments to date.

"Mr. Obama was elected with almost no national security experience, but he counted on two principle sources of leverage on the world stage: his personal charisma and the fact that he was not George W. Bush."

Here is what his charisma achieved since he was obviously "not GWB":

1. “First-week pledge to close the detainee facility at Guantanamo Bay within a year. Mr. Obama soon found that it was easier to make lofty promises than to deliver prudent policies.”

2. “The president announced a "stronger and smarter" strategy for Afghanistan in March, and another in November that contained a deadline which is not quite a deadline, for a pullout that is not really a pullout.”

3. “Mr. Obama's unprecedented, fawning outreach to the Muslim world has produced no tangible results, no dramatic shifts in public opinion regarding U.S. policies, and certainly no reduction of the terror threat.”

4. “The one solitary success Mr. Obama has enjoyed came from continuing President Bush's policy of using drone aircraft for selective strikes on terror targets. Philip Alston, United Nations Special Rapporteur on Extrajudicial, Summary or Arbitrary Executions, has said that this practice may violate international law, and it has caused some consternation among Mr. Obama's supporters who were under the mistaken impression that he is a man of peace.”

5. “Mr. Obama's outreached hand failed to uncurl Tehran's fist; Iran's Islamic regime is pushing ahead on its nuclear and missile programs and unleashing thugs to beat down pro-democracy demonstrators.”

6. “When Mr. Obama spoke dreamily in September about a world without nuclear weapons, French President Nicolas Sarkozy noted sharply that the only things such proposals have delivered are "more uranium enrichment and declarations by the leaders of Iran to wipe out a U.N. member state off the map."

7. “In May, Israel ignored the administration's demand for a settlement freeze, and the Arab world was shocked when Secretary of State Hillary Rodham Clinton backed off the freeze demand in November. The administration quickly walked back Mrs. Clinton's statement, which only enhanced the sense of American confusion and impotence.”

8. “The Obama administration flip-flopped in dealing with the presidential crisis in Honduras, unwisely rushing to side with Venezuela, Cuba and Nicaragua in calling for return of failed dictator Manuel Zelaya. Then, months later, the United States supported the results of the Honduran elections.”

9. “The administration delighted Moscow by abandoning the missile defense system slated for deployment in Poland and the Czech Republic.”

10. “North Korea continued to pursue its objectives unabated, testing a nuclear weapon and long-range missile, withdrawing from the 1953 armistice agreement with South Korea and declaring it will weaponize its plutonium stocks. In response, the United States unilaterally conceded to long-standing North Korean demands for bilateral talks, and several weeks ago the president sent a personal appeal to dictator Kim Jong-il to which he has not received a response.”

11. “The Copenhagen climate conference turned out to be a dismal failure. Chinese Premier Wen Jiabao openly snubbed the president, and the final statement which Mr. Obama brokered was not approved by the conference.”

12. “Giving England's Queen Elizabeth II an iPod with his own speeches on it.”

13. “Giving British Prime Minister Gordon Brown a collection of DVDs that were not formatted to the European standard (by contrast, Mr. Brown gave Mr. Obama an ornamental desk-pen holder made from the oak timbers of Victorian anti-slaver HMS Gannet, among other historically significant gifts).”

16. “Bowing to the Japanese emperor.”

17. “Releasing a photo of a conference call with Israel's Prime Minister Benjamin Netanyahu in which the president was showing the soles of his shoes to the camera (an Arab insult).”

18. “Saying "let me be absolutely clear. Israel is a strong friend of Israel's"

19. “Saying the United States was "one of the largest Muslim countries in the world"

20. “Suggesting Arabic translators be shifted from Iraq to Afghanistan where Arabic is not a native language”

21. “Sending a letter to former French President Jacques Chirac when Nicolas Sarkozy was the president of France”

22 “Holding a town-hall meeting in France and not calling on a single French citizen.”

23. “Referring to "Cinco de Cuatro" in front of the Mexican ambassador when he meant Cinco de Mayo.”

24. “Failing in a last minute personal appeal to the International Olympic Committee to hold the 2016 Olympics in Chicago.”

25. “Mr. Obama's Nobel Peace Prize capped the year by drawing attention to his lack of achievement.”
Posted by rosey at 8:50 AM