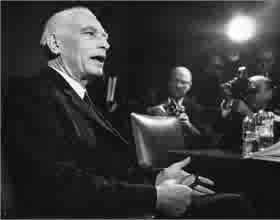 One thing that strikes me is how similar Christopher Dodd’s political and corruption mirror that of his father and the climate of the financial crisis of today.

All of this familial history is emerging now that Sen. Dodd has announced that he will not seek another term (after 3 decades in the Senate). His press conference was worded to show that he was stepping aside to allow newcomers into the halls of power in a way that appeared noble and quaint but the reality is that his past has caught up with him and recent polls show this. As an article in the “Weekly Standard” they explain his impending loss as “Christopher Dodd, the Banking Committee chairman and a five-term Democratic senator in a state with a substantial Democratic majority, has withdrawn from a re-election race he was destined to lose, and lose badly, amid allegations of personal and official corruption.”

Powerful Democratic leaders have most likely demanded he step aside to preserve the “party power” in a last ditch, panicked bid to keep as many seats as possible in the upcoming blood bath we call the 2010 elections.

In the same Weekly Standard article they describe the elder Dodd as “Christopher Dodd's father, Sen. Thomas Dodd, a well-regarded ex-FBI agent and Nuremburg prosecutor, was censured by the Senate for corruption toward the end of his second term, was denied the Democratic nomination for re-election to a third term, ran as an independent, came in third in a three-way race.

Another interesting bit of history is that the person that the elder Dodd initially lost his first bid to the Senate was to the patriarch of the Bush family, Prescott S. Bush.

In 1967 Dodd became the first Senator censured by the US Senate since Joseph McCarthy in 1954, and was one of only six people censured by the Senate in the 20th century. The censure was a condemnation and finding that he had converted campaign funds to his personal accounts and spent the money

In his role as chairman of the Senate Banking Committee Dodd proposed a program in June 2008 that would assist troubled sub prime mortgage lenders such as Countrywide Financial in the wake of the United States housing bubble's collapse. Condé Nast Portfolio reported allegations that in 2003 Dodd had refinanced the mortgages on his homes in Washington, D.C. and Connecticut through Countrywide Financial and had received favorable terms due to being placed in the "Friends of Angelo" VIP program, so named for Countrywide CEO Angelo Mozilo. Dodd received mortgages from Countrywide at allegedly below-market rates on his Washington, D.C. and Connecticut homes. Dodd had not disclosed the below-market mortgages in any of six financial disclosure statements he filed with the Senate or Office of Government Ethics since obtaining the mortgages in 2003.

Senator Dodd was involved in issues related to the federal takeover of Fannie Mae and Freddie Mac during the 2008 sub prime mortgage crisis.

As part of Dodd's overall mortgage bill the Housing and Economic Recovery Act of 2008 before Congress in the summer of 2008, Treasury Secretary Hank Paulson sought provisions enabling the Treasury to add additional capital and regulatory oversight over these government sponsored enterprises. At the time, it was estimated that the federal government would need to spend $25 billion on a bailout of the firms.

During this period, Dodd denied rumors these firms were in financial crisis. He called the firms "fundamentally strong", said they were in "sound situation" and "in good shape" and to "suggest they are in major trouble is not accurate".

In early September, after the firms continued to report huge losses, Secretary Paulson announced a federal takeover of both Fannie Mae and Freddie Mac. Dodd expressed skepticism of the action, which the Treasury estimated could cost as much as $200 Billion.

Dodd is the number one recipient in Congress of campaign funds from Fannie Mae and Freddie Mac. Critics also charge that Dodd ignored repeated warnings that the two firms were in need of major reform.

From the fall of 2008 through early 2009, the United States government spent nearly $170 Billion to assist failing insurance giant, AIG. AIG then spent $165 million of this money to hand out executive "retention" bonuses to its top executives. Public outrage ensued over this perceived misuse of taxpayer dollars.

Senator Chris Dodd was responsible for the inclusion of a clause limiting excessive executive pay in the American Recovery and Reinvestment Act. On February 14, 2009, the Wall Street Journal published an article, Bankers Face Strict New Pay Cap, discussing a retroactive limit to bonus compensation inserted by Chris Dodd into the stimulus bill that passed in the Senate.

The same article went on to mention that Treasury Secretary Timothy Geithner and Lawrence Summers "had called Sen. Dodd and asked him to reconsider".

When the bill left conference, Dodd's provision had been amended to include a provision preventing limits on bonuses previously negotiated and under contract. This provision was lobbied for by Geithner and Summers.

As Dodd explained in his March 18 interview on CNN, at Geithner and the Obama Administration's insistence he allowed his provision's original language to include Geithner and Summers' request, which in turn allowed AIG to give out bonuses under previously negotiated contracts. However, Dodd's provision also includes language allowing the Treasury Secretary to examine bonuses doled out and, if they are found to be in violation of the public interest, recoup those funds.

Dodd retreated from his original statement that he did not know how the amendment was changed. Dodd was criticized by many in the Connecticut media for the apparent flip-flop. In a March 20, 2009 editorial the New Haven Register called Dodd "a lying weasel" The same day, Hartford Courant columnist Rick Green called on Dodd not to seek re-election in 2010.

The Hill.com described Dodd as "reeling" from the controversy and having "stepped in it" after changing his story as to the bonus amendment.

At a press conference in Enfield, Connecticut, on Friday, March 20, Dodd responded to critics and explained that his original answer to a CNN answer was based on a misunderstanding of the question. He also said he was disappointed that the Treasury officials who asked him to make the legislative changes had not identified themselves, refusing to confirm the actual identity of the individuals responsible for changing the amendment.

The next day, voters in Ridgefield rallied against Dodd and the Obama economic agenda The Manchester Journal Inquirer suggested that "Chris Dodd's explaining may have only begun".

Opensecrets.org reports Dodd has received over $223,000 from AIG employees, many of whom were Connecticut residents, for his recent campaigns. Additionally, it has recently been revealed that Senator Dodd's wife is a former Director for Bermuda-based IPC Holdings, a company controlled by AIG. She held this position before she married Senator Dodd. On May 3, 2009, the Courant reported Dodd's wife served on a number of corporate boards, including the CME Group and could be earning as much as $500,000 annually for her service on said boards.

On March 30, 2009, it was reported that former AIG Financial Products head Joseph Cassano personally solicited contributions from his employees in Connecticut via an e-mail in fall 2006 suggesting that the contributions were related to Dodd's ascension to the chairmanship of the Senate Banking Committee.

Can you say, like father, like son (except the son did not have an illustrious and historic role against despotism)….
Posted by rosey at 5:32 PM