Scott Ritter displays his own weapon of mass disappointment! 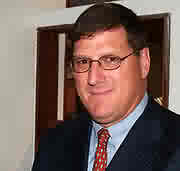 Third arrest during internet sex sting of under aged girls!

I have not seen any accounts from the MSM outing the former UN Weapons Inspector for having “virtual sex” on the internet with a 15 year old girl.

On January 14, in an internet “child sex sting” the open critic of George Bush during the Iraq war was swept up for attempting (twice) to have sex with an under aged girl.

Officer Ryan Venneman was posing as 15-year-old “Emily” in an online chat room when he was contacted by someone using the name “Delmarm4fun.” This person, later identified as Ritter, told “Emily” he was a 44-year-old male from Albany, N.Y.

“Emily” asked Ritter for his cell phone number, which he provided.

Ritter again asked “Emily” how old she was. Told she was 15, Ritter said he didn’t realize she was 15 and turned off his webcam, saying he didn’t want to get in trouble.

Ritter told “Emily” he had been fantasizing about having sex with her, to which she replied: “Guess you turned it off …”

Ritter then said: “You want to see it finish,” reactivated his

The online conversation occurred in February 2009, but the investigation lasted until November, when Ritter was charged, because police had to undergo the lengthy process of obtaining court orders to get Ritter’s cell phone and computer information.

Ritter is awaiting his next appearance in Monroe County Common Pleas Court. He waived his right last month to a preliminary hearing and is free on $25,000 unsecured bail.”

In 2003, he acknowledged in TV news appearances that he had faced online child-sex charges in 2001 in New York, but said they were designed to silence his war criticism. The charges were dismissed.

“Ritter was arrested in April 2001 and again in June 2001 in connection with police stings in which officers posed as under-aged girls to arrange meetings of a sexual nature. The first incident did not lead to any charges. He was charged with a misdemeanor crime of "attempted endangerment of the welfare of a child" after the second, but charges were dropped and the record was sealed on condition that he avoid further trouble for a period of time. News of the arrests became public after sealed court records were provided anonymously to the press. Ritter claimed that the timing of the leak was a politically motivated effort to distract attention from his statements about Iraq.