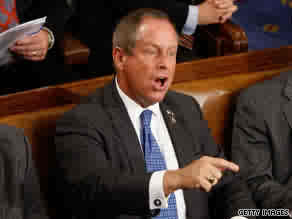 
The MSM opens with Steny Hoyer’s Comment – “With about one in 10 Americans out of work, the highest percentage in 25 years, President Barack Obama's fellow Democrats -- who control the Senate and House of Representatives -- are making job creation their top priority.

"Americans have a lot of angst, a lot of anger, a lot of fear," said House Democratic leader Steny Hoyer. "Whether you are a Democrat or a Republican or an independent, all polls show that jobs are the major issue."

So, job creation is their top priority! Then why are they still trying to ram “Health care” down our throats first?

The very next sentence in the article states – “Indeed, as the full Senate returns from the Christmas break on Wednesday, a week after the House, the jobs recovery will also be high on the White House agenda along with the massive relief effort for quake-stricken Haiti.

In addition to jobs, lawmakers face challenges on a host of fronts -- from healthcare and the record U.S. deficit, to climate change, efforts to tighten regulation of the U.S. financial industry and lapses in domestic security.

Notice the one thing that our representatives are bound by the constitution to do (Homeland Security) comes in dead last.

Again, the article admits that the Jobs creation bill that is already in the pipeline is aimed at benefiting Union workers only – “Last month, the House passed a $155 billion bill that aims to stimulate the job market through infrastructure projects and helping states pay the salaries of public employees.

Assistant Senate Majority Leader Dick Durbin, along with Democratic Senator Byron Dorgan, is expected to offer a jobs package in coming weeks. It is likely to include efforts to boost small business and renewable energy, aides said.

If the Senate passes a jobs bill, it would have to be reconciled with the House measure.”

But, the article swings back to – “Among Democrats' most immediate concerns is melding a Senate healthcare bill with one passed by the House to give Obama a final bill to sign into law so Democrats can put their full focus on generating employment after the deep economic slump.”

This article, which is titled “Congress makes job creation its top 2010 priority” is pure subterfuge as the last quote pulled from the article above makes it quite clear that the most immediate concern is passing “Health care” so they can put “full focus” on jobs.

So we can expect the “cornered and scared dogs” of the Democratic Party to pull their forces together to put as much subterfuge in the public domain as possible to aid the incumbents that are expected their campaigns soon. All eyes are on the special election to see what everyone already knows that the seat once filled by the alcoholic Kennedy will be lost to the Republican Scott Brown. Just like New Jersey and Virginia the Socialists are being thrown out of office and putting the rest of them in a political corner that they do not know how to escape from.

Remember when Obama was holding a “joint session of Congress” to address the health care bill and Representative Joe Wilson yelled “YOU LIE”?

Rep Wilson was only saying what most Americans believe about the Democrats and the White House – “They are lying”!

The upcoming weeks and months are unfolding and the incumbent socialists are already feeling the heat. Ben Nelson was recently booed at a pizza parlor in Nebraska. Mary Landreau is in hiding after the “Louisiana Purchase” and each and every Congressman/Congresswoman and Senator in both the House and Senate have received over 9 million pink slips to their offices. That number is expected to breach the 10 million mark by the end of January. Each pink slip that has been sent to those hallowed halls can be tied back to an individual (10 million individuals) who has spent $29.95 of their own personal money in these tough economic times to send them the message which they are ignoring at their own peril.

The lies and distortions will only increase in absurdity the closer we get to the mid term elections. There is no lie or distortion that will be seen for anything other than what it is and they know it.
Posted by rosey at 8:58 AM